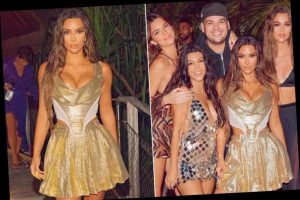 Kim Kardashian spent $1 million to fly her family and friends on a  private jet to celebrate her 40th birthday on one of the world’s most breathtaking private islands in Tahiti, Page Six can exclusively reveal.

Kim chartered an 88-seat Boeing 777 last week to fly a group of under 30 to The Brando, a luxurious private island resort in French Polynesia with just 35 villas.

Her group — which included sisters Kourtney Kardashian, Khloé Kardashian and Kendall Jenner, brother Rob Kardashian and mom Kris Jenner — were treated to a host of lavish dinners, spa visits and guided treks through the lush island, known locally as Tetiaroa Atoll and famed for its stunning blue lagoon.

A source told us, “The group was limited to Kim’s closest family and friends. Everyone on the trip was repeatedly tested for COVID before they left in the middle of the night on a private Boeing 777.

“Once on the island they had lavish dinner after dinner, spa treatments and hikes through the nature sanctuary. There was no expense spared. Everyone was banned from posting on social media by Kim to ensure her privacy.”

They jetted out of Los Angeles on October 20 on Crystal Cruises’ Boeing 777-200LR, which features 88 flat beds, a restaurant and a bar, and returned home five days later.

Her group took over the entire breathtaking island, which features 35 one-, two- and three-bedroom villas, which all have private pools and rent for up to $20,000 a night plus tax. There are numerous white sand beaches, a shimmering lagoon — where Kim later posted bikini pictures of herself on Instagram — and vibrant coral reefs.

The Brando Resort — Marlon Brando’s private island — is known as one of the finest eco-friendly resorts in the world. It also offers two gourmet restaurants, two hotel bars, a luxurious spa and an organic fruit orchard and vegetable garden.

The lavish trip was met with significant backlash on social media amid the coronavirus pandemic.

The KKW Beauty founder posted several pics with family and friends, including La La Anthony, Scott Disick and Tristan Thompson, as they celebrated her birthday without a mask in sight.

Her husband, Kanye West, was also said to be there despite being absent from her photos.

“After 2 weeks of multiple health screens and asking everyone to quarantine, I surprised my closest inner circle with a trip to a private island where we could pretend things were normal just for a brief moment in time,” she shared on social media on Tuesday. “We danced, rode bikes, swam near whales, kayaked, watched a movie on the beach and so much more. I realize that for most people, this is something that is so far out of reach right now, so in moments like these, I am humbly reminded of how privileged my life is. #thisis40”

Despite recognizing her privilege and noting the health precautions that were taken to avoid the spread of COVID-19, Twitter users sounded off at Kardashian for her tone-deaf post.

“I haven’t seen ma family in 4 months because I work a public-facing job and I’m absolutely terrified of the possibility of passing Covid on to my vulnerable parents. I hope you had fun pretending things were normal, but spare a thought for those of us staying in the real world,” one person tweeted to Kardashian.

“nobody in this family could read a room if their life depended on it,” another added.

“lmao reading this as half of my office got laid off today,” wrote another.

“everyone mad at this tweet is just jealous that they didn’t think to fly their jets to their own private islands. it’s so obvious yet kim is the only one who thought to do it. that’s why she’s a visionary and y’all are stuck at work 💅,” another joked.

Her rep did not immediately respond to our request for comment.

END_OF_DOCUMENT_TOKEN_TO_BE_REPLACED

END_OF_DOCUMENT_TOKEN_TO_BE_REPLACED
We and our partners use cookies on this site to improve our service, perform analytics, personalize advertising, measure advertising performance, and remember website preferences.Ok