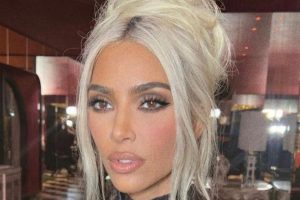 We all know by now that Kim Kardashian is currently peroxide blonde. The news swept the internet after the 41 year old debuted the daring new look at the Met Gala back in May. Fans first wondered if the Marilyn Monroe-esque blonde was the work of a wig – a likely possibility, considering Kim often turns to faux hair for her more extravagant makeovers – but it turns out that she did bleach her real hair for the event.

Kim later admitted she "risked getting my hair to fall out" for the look in a behind-the-scenes YouTube video made by younger sisterKylie Jenner. Well, you know what they say: beauty is pain. Now, fans are wondering if Kim’s hair might indeed have suffered that ill fate of peroxide-related breakage.

In a new post on her Instagram page, the mum-of-four poses for a snap with Vogue’s Anna Wintour. Both of the women can be seen with shoulder-skimming, blunt bobs.

Fans are complimenting the star on her shorter hair length, but a few also seem concerned about the condition of her lengths.

“Kimmy your hair fried,” comments one, while another asks: “Where did your hair go though..?”

It might be that Kim is suffering from a serious case of dry ends, but it’s more likely that this bob is either the work of a good wig or the result of Kim taking her extra-long extensions out after coming back from a sun-soaked holiday.

Kim’s go-to hairstylist Chris Appleton has since shared two snaps of the star taken on the same day: one of her wearing her hair in mermaid-like long waves and the second of her fresh new bob. He asks followers in the caption: “Nyc today with Kimmy

Long or short – what gets your vote?”

Whether Kim has cut it for real or not, it wouldn’t be the first time a bleaching session – no matter how expertly done – has caused damage to hair. OK!’s own beauty assistant Emma had first hand experience of this herself when she decided to go from dark brunette to a Mother of Dragons shade of blonde.

“I spent over a year getting my hair lightened gradually, with months between each appointment – but it all went wrong when I decided to opt for a full scalp bleach similar to the look worn byKim Kardashianat this year’s Met Gala,” she says.

“Little did I know that just a few days later, the novelty would wear off. That ‘new hair, new me’ feeling was replaced with horror. No matter how many masks or treatments I put on my hair, it felt so dry. The blunt, blonde lob I was hoping for quickly transformed into a mullet so messy, I’m certain even Miley Cyrus would turn up her nose at it.”

Who knew being blonde was such a dangerous sport?

For all the latest celebrity news including their hair and makeup secrets, sign up to the OK! Daily Newsletters now