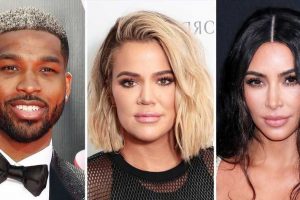 Family first! Kim Kardashian stood by Khloé Kardashian‘s side after Tristan Thompson apologized to her younger sister for his messy paternity scandal.

Kim, 41, shared a sweet family photo of the two sisters posing for the camera at a Sing 2 event on Tuesday, January 4. The beauty mogul was joined by her son Saint, 6, and daughter Chicago, 3, in the shot while Khloé, 37, held her 3-year-old daughter, True, in her arms. Kim’s daughter North, 8, made an appearance in another snap as well.

The Skims founder, who also shares 2-year-old Psalm with estranged husband Kanye West, added the infinity symbol as the caption, which Khloé added in her response to the post. Kim’s subtle supportive message comes one day after Thompson, 30, revealed that he is the father of Maralee Nichols‘ son.

“Today, paternity test results reveal that I fathered a child with Maralee Nichols. I take full responsibility for my actions,” he wrote via Instagram Stories on Monday, January 3. “Now that paternity has been established I look forward to amicably raising our son.”

After the genetic test came back positive, the professional basketball player offered an apology to the reality star for the situation, saying, “Khloé, you don’t deserve this. You don’t deserve the heartache and humiliation I have caused you. You don’t deserve the way I have treated you over the years. My actions certainly have not lined up with the way I view you. I have the utmost respect and love for you. Regardless of what you may think. Again, I am so incredibly sorry.”

The Sacramento Kings player was originally sued by Nichols, 31, in July 2021 for child support when the fitness model claimed that he was the father of her child. The Canada native, for his part, acknowledged that he previously hooked up with Nichols and requested genetic testing in response to the original court filing.

As Thompson’s legal issues made headlines months later, Us Weekly broke the news in December 2021 that Nichols gave birth to a baby boy. At the time, a source exclusively told Us that Khloé found out about the paternity lawsuit through Thompson, noting, “He knew it was inevitable [and] that he would no longer be able to keep it from her.”

Another insider revealed that Khloé had her famous family’s full support amid the news, noting, “[They] have been very supportive to her. Even though Khloé is hurt, she’s staying strong and trying to move forward.”

According to court documents, Nichols claimed that she knew Thompson since 2020. The NBA star, who also shares a 5-year-old son with ex Jordan Craig, was dating Khloé at the time when his interactions with Nichols occurred.

The Kardashian-Jenner Family’s Friendships With Their Exes: A Guide

Nichols, for her part, addressed Thompson’s public statement, saying “There was never any doubt that Tristan Thompson was the father.”

The Texas native continued via a publicist: “Tristan made numerous false and defamatory statements and declarations about Maralee over the past few months, and she is taking his contrite statement today in the context of all of those statements.”