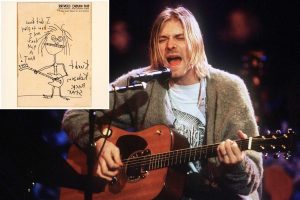 Smells like someone made a profit off the late rock star’s self-portrait.

The doodle, labeled as “Kurdt Kobain Rock Star,” also reads: “I don’t know how to play and I don’t give a hoot!”

The drawing was auctioned for a cool $281,250 by Julien’s Auctions, according to the Observer, along with other items that once belonged to Cobain.

The musician’s personal belongings are scarce, so when they do appear at auctions, they sell for a pretty penny. In 2019, Cobain’s sweater from his final photoshoot with Nirvana sold for $75,000 and his “MTV Unplugged” guitar went for $6 million. Last month, Cobain and Courtney Love’s house went up for sale in Los Angeles for nearly $1 million.

This year marked the 27th anniversary of Cobain’s death, when he took his own life at 27.