As if they weren’t already one of the cutest couples ever, Kylie Jenner and Travis Scott both got tattoos last night, April 30, at his 28th birthday party. I know what you’re thinking: "tattoos at a birthday party… ?" Allow me to explain. The Grammy-nominated Astroworld rapper’s birthday party was far from a chill night in.

No, instead, he had a raging birthday bash and the theme was none other than… Travis Scott. In one of her stories, Jenner admitted she was actually feeling sick the day of the big event but she reassured fans that she would "still go hard for" her "baby." Aw.

And, boy, did she deliver on that promise. In fact, Jenner was so determined to make the most of her partner’s birthday bash that she even participated in the tattoo both where Entertainment Tonight reports she and Scott both got inked. To be clear, this wasn’t one of those air brush or press-on tattoo booths you had at your birthday party in third grade. No, this was a real tattoo booth. 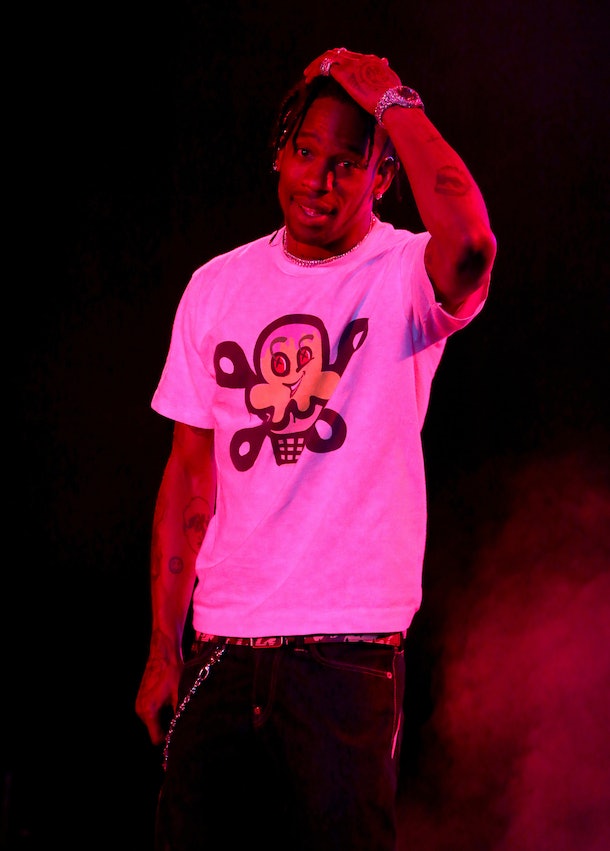 In one video from the party, Scott is captured giving Jenner a kiss while she gets a tattoo on her arm. No intel on what either of their tattoos say, but I hope they’re giving little shoutouts to each other because, like, how cute?!

In addition to the tattoo booth, Jenner’s story along with those of her sisters, Kim Kardashian West and Kendall Jenner, showed tons of fun features that solidified the fact that Scott’s 28th birthday bash was far more lit than yours (or mine) will ever be.

No, seriously. Here’s a picture from Kim Kardashian West’s Instagram:

Once guests entered the party, it started to look less like a fun house and more like a giant 7/11. Entertainment Tonight reports the party also had Travis Scott paper towels, Cactus Jack Hennessey slushies, and more at the Scott-themed 7/11.

Obvi Scott’s Nike Air Jordan 4 shoes were also just casually hanging from trees throughout the venue, according to Entertainment Tonight.

So, yeah, it was a pretty extra event. But would you expect anything less from a rapper who dates the Kylie Jenner? I know I wouldn’t.

Before attending the outrageous birthday party, Jenner took to Instagram to wish her partner a happy birthday. Along with a series of adorable pictures of them in a carousel, Jenner wrote a pretty forward caption:

watching you evolve into the partner, friend, son, and father you are today has been so fulfilling ♥️ my real life bestie & hubby all wrapped into one. i love you and I’m so so proud of you. happy happy birthday ?? let’s fuck around and have another baby. ?

Yes, you read that correctly. Jenner blatantly told Scott (and the whole world!!) that she’s ready to give their baby Stormi a sibling. Here’s to hoping they make it happen!