By Josh Dye and Mark Stehle 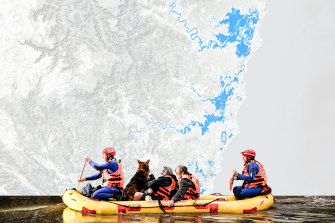 The origins of the one-in-50-year flooding event, however, can be traced back to September, when the weather bureau declared the arrival of the La Nina weather pattern.

As one of the world’s strongest climate drivers, La Nina warms ocean temperatures in the western Pacific, leading to increased rainfall in northern and eastern Australia.

What followed was a summer that was 29 per cent wetter than average which left the soil sodden and dams full.

As a result, riverside towns were plunged into a crisis that NSW Premier Gladys Berejiklian described as “catastrophic”.

Using radar observations and data derived from European Space Agency satellites, together with the Bureau of Meteorology, The Sydney Morning Herald mapped the likely flooded areas for that week.

On March 17, the Bureau of Meteorology issued a severe weather warning for coastal NSW as the first raindrops fell along the Mid North Coast.

Forecasters had known for days that the collision of two large systems – a low-pressure trough off the coast and a big cloud band feeding in moist tropical air from north-western Australia – would dump a lot of water.

What they couldn’t predict was exactly where it would fall, for how long, and what the consequences would be.

The rain stuck around longer than usual because of a high-pressure system in the Tasman Sea blocking the low from moving east.

On March 19, Kempsey received 226 millimetres, part of a weekly total of 758 millimetres. Residents were evacuated as the town centre went underwater.

Port Macquarie’s main street was evacuated as floodwaters rose and the Hastings River at Settlement Point peaked at two metres, the highest since 1968.

Eighty kilometres south, the towns of Taree and Wingham were copping a drenching too.

The rain caused the Pacific Highway, the main route between Sydney and Brisbane, to be cut off in several places.

It also shattered the wedding plans of Taree couple James Farrawell and Anya Kerrigan who were separated due to the rising water.

“The bride was obviously devastated when morning light arrived to reveal that the wedding venue had become an isolated island in the hills,” Mr Farrawell’s brother Daniel said.

Wingham received 609 millimetres for the week and the Manning River at Taree peaked at 5.7 metres on March 20, equalling the highest peak set in 1929.

In Sydney, steady rain grew heavier as the weather system moved south and the moist tropical air from north-western Australia reached the east coast. The city recorded 2½ hours of sunlight for an entire week.

By March 21, the Hawkesbury-Nepean region to the north-west was copping its heaviest falls.

Castle Hill had 166 millimetres of rain on March 21, a record for a single day in March. The same day, Faulconbridge in the Blue Mountains had 145 millimetres, its wettest March day since 1942.

Warragamba Dam, Sydney’s largest water storage facility, was brimming at 97.5 per cent in the days preceding the extreme rainfall.

The dam began overflowing on March 20, adding to the floodwaters that pooled in the Hawkesbury basin.

The State Emergency Service ordered Penrith residents to evacuate to higher ground on March 21, the same day the Hawkesbury River peaked at 14 metres at North Richmond.

Treacy Bugeja will never forget the moment she returned to her Windsor home and found the bottom storey waist-deep in dirty brown water.

“I just burst into tears,” she said.

On March 24 the rain cleared and sunshine returned. The weather system, which drenched coastal areas from south-eastern Queensland to eastern Victoria, headed east over the Pacific Ocean.

But while the rest of Sydney moved on, residents in flood-stricken areas were left to mop up.

The floods were La Nina’s final flourish as the weather bureau declared the phenomenon over on March 30.

It contributed to the wettest summer since 2010-11, and once this extreme weather event concluded NSW had recorded its third-wettest week since 1900.

The floods triggered fierce debate among Hawkesbury residents about the height of the Warragamba Dam wall and whether storage levels should have been reduced prior to the extreme weather.

The floods claimed two lives: 78-year-old Adele Morrison who was found on a rural property near Gloucester, and 25-year-old Ayaz Younus, who died trapped inside his car after it sunk in floodwaters at Glenorie in Sydney’s north-west.

On Wednesday, May 5, six weeks following his tragic death, Mr Younus will be buried after his parents were granted an exemption to travel from Pakistan for his funeral.

Our Morning Edition newsletter is a curated guide to the most important and interesting stories, analysis and insights. Get it delivered to your inbox.