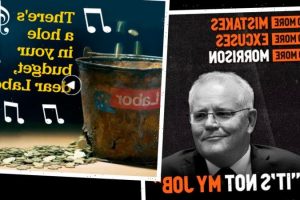 Labor is using the final days of the campaign to blast Facebook and Instagram with negative ads attacking Scott Morrison’s character, as part of a digital strategy that has poured vastly more dollars into its online campaign than the Coalition.

The digital barrage is expected to intensify as the broadcasting blackout kicks in from midnight on Wednesday, banning election advertising on television or radio until the close of polls on Saturday, but leaving a free-for-all online. Print media is also not covered by the blackout, which is mandated by federal broadcasting laws. 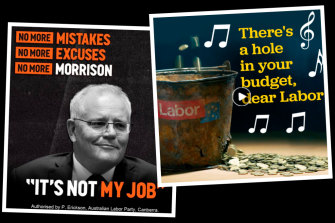 Labor is outspending the Liberals on digital ads, as both sides go negative in the final days of the campaign.Credit:The Age

Labor has spent more than $1.4 million on ads promoted by its official ALP Facebook and Instagram pages in the past month – half of it splashed on a flurry of ads over the course of last week ending May 14 , according to the latest available data from Facebook’s Ad Library.

By comparison, the Liberal Party has spent just $270,000 through its central social media accounts over the past 30 days, of which about $126,000 was spent in the seven days to May 14 – the second last week of the campaign.

Labor is also outspending its opponent on YouTube, where it has forked out about $1.5 million on ads since the beginning of April, compared with $680,000 from the Liberals, according to Google’s Ad Transparency report. However, Clive Palmer’s United Australia Party is wildly outspending both, splashing almost $7 million on YouTube ads since early April as part of an $18 million spend since August.

Dr Glenn Kefford, a political scientist at the University of Queensland who has been analysing the social media ad spend by parties during the campaign, said Labor appeared to have learned the lessons from its shock election defeat in 2019.

“The headline takeaway from this election is really Labor’s response to what happened in 2019. In their post election review, they recognised that they were pretty significantly trounced online and this time around they’ve clearly made this a really big focus of the campaign,” Kefford said.

“The various Labor funding entities have really spent a lot of money. If you compare that spend with the Liberal Party state divisions, as well as just the central Liberal campaign, Labor is spending in the order of three or four to one.”

A key conclusion of Labor’s internal 2019 election post-mortem was the party had been out-gunned by the Coalition online, despite a 160 per cent increase in its digital advertising budget compared with its 2016 campaign. The report identified a lack of digital literacy in the party’s senior ranks, and found an “urgent need to dramatically improve its digital campaigning capability”.

Both camps have launched about 20 negative ads each across the two platforms in the past two days alone. Labor is seeking to hammer home the themes of accountability and trust, with ads featuring video or still images of Morrison with text saying “it’s not my job”, “I don’t hold a hose”, and “it’s not a race”.

The Liberal ads are primarily targeted at Labor’s economic management, with the bucket ad that has been on high rotation on TV also adapted for online. It features a bucket with a hole in and money spilling out along with the jingle: “There’s a hole in your budget, dear Labor.”

Marketing strategist Toby Ralph, who worked on John Howard’s election campaigns, said voters could expect to be deluged with last-minute scare ads in the final run to polling day.

“As the campaign progresses, you get ever more negative because you’re all about proving that the other side are incapable of running the country.”

Ralph believes that Labor is winning the advertising war, singling out the “it’s not my job” ad as the most effective of the campaign.

“Their ads are better and have more cut through. The Liberals are right to concentrate on economy, but their only hope frankly is to really scare people that Labor is going to screw it up,” he said.

“I think the response to ‘It’s not easy under Albanese’ is, it hasn’t been easy under you either. That’s the problem.”