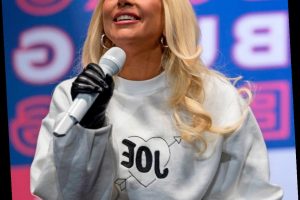 'Twas the night before Election Day, when in Pittsburgh, Penn., Lady Gaga couldn't help but reminisce about her relationship with ex-fiancé Taylor Kinney.

The pop star performed at Joe Biden's final drive-in campaign rally on Nov. 2, when in between "Shallow" and "You and I" Gaga referenced living with the actor throughout the five years they were together.

"But I still love my Pennsylvania guy," the Oscar winner continued. "I love Joe! So Joe's my new Pennsylvania guy. And I love nothing more than this moment, for this time, for you and I!"

Right before hitting the final note of "You and I," the song that coincidentally brought her and Taylor together when they met on set of the music video, Gaga offered an apology to her current boo, Michael Polansky.

"To my boyfriend that's here tonight," she said, "I'm so sorry I had to do the whole 'Pennsylvania, and I dated a guy here' thing. I love you so much, but it's true."

Gaga wrapped up her time onstage by encouraging Americans to cast their vote for the 2020 presidential election.

As the race to the White House nears the finish line, Gaga (among dozens of other stars) have stressed the importance of hitting the polls.

"If you don't like the system, if you want this country to be different than it is right now, you have got to participate in this election," she said in a PSA inspired by her most iconic looks throughout the years. "When they announce who has won this election it will be very clear what this country has become. The government is not going away tomorrow and unless you have a plane ticket to another country and somewhere you're going to live this is going to be your home. No matter how you feel your future is in your hands with this vote."

Watch Gaga's performance above, and stay up to date on all things related to the presidential election by checking out NBC News' Decision 2020 coverage right here.