Lauryn Hill Drops A New Rap Verse On Nas's "Nobody" 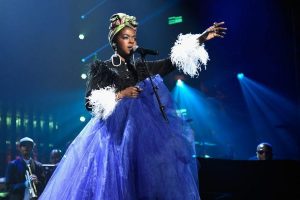 When a queen speaks, we listen.

On August 6, Nas unleashed his latest album, King’s Disease 2. The second component to his 2019 project, the new release has got fans talking about the long awaited reconnection of Nas and Lauryn Hill. The two hip-hop titans kept it honest, and gave us depth, on a new track titled “Nobody.”

Ms. Hill let listeners know that she’s aware of all the chittering in regards to her court (“My awareness like Keanu in ‘The Matrix’ / I’m saving souls and y’all complaining about my lateness”), and knows her status as one of the greats in life and with lyrics, (“Now the world will get to see it’s own reflection/And the anointed can pursue their own direction”).

Read our story on how The Miseducation of Lauryn Hill is sacred listening.

“Nobody” is the first time we’ve heard Nas and Hill together since 1996’s “If I Ruled the World (Imagine That) from the former’s It Was Written album. The song was Hill’s first time crafting music without the Fugees.

They two went on the road together in 2012 for the Life Is Good/Black Rage tour.

It also marks one of the rare song offerings from Hill. In recent years, she’s appeared on a handful of tracks: “Black Rage,” “Fearless Vampire Killer,” “Consumerism,” “Guarding the Gates” from the Queen & Slim soundtrack and Teyana Taylor’s “We Got Love.” She also participated in the soundtrack for What Happened, Miss Simone? in 2015.

You can catch Lauryn Hill at the 2022 Lovers & Friends music festival in 2022, where she will be a headliner.

Head to ESSENCE Girls United to get the full scoop on the fest.

Listen to “Nobody” below.