Home » Lifestyle » Leigh-Anne Pinnock due date: Everything you need to know about Little Mix star’s pregnancy

Leigh-Anne Pinnock due date: Everything you need to know about Little Mix star’s pregnancy 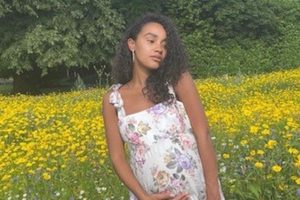 Little Mix star Leigh-Anne Pinnock announced the exciting news that she was expecting her first baby in May.

The 29 year old took to Instagram to share gorgeous photos of herself cradling her exposed baby bumps with her millions of followers, alongside her fiancé Andre Gray.

Posing in an emerald green bra top, Little Mix star Leigh-Anne looks away from the camera, with material covering the rest of her body.

Her Watford FC footballer fiancé Andre, 29, joins her in one of the images, were the couple beam.

The Shout Out To My Ex hitmaker captioned the adorable post: "We've dreamed about this moment for so long and we can't believe the dream is finally coming true… we can't wait to meet you."

Here's a look inside Leigh-Anne's pregnancy journey, and when her due date may be.

With the exciting news that both Perrie and Leigh-Anne were pregnant at the same time, the girls shared a photo cradling their bumps, alongside their manager Samantha Cox, who is also pregnant.

The adorable photo of Perrie, 27, Leigh-Anne, 29, and their manager Samantha shows all three women posing while sweetly cradling their bumps.

Band manager Samantha shared the photo on her Instagram page as she gushed over the unborn babies being close in the future.

She wrote in the caption: “Future best friends pending….

“We’ve been through so much and now we get to do this together!! Love you both @perrieedwards @leighannepinnock and Aunty @jadethirlwall”.

The girls cradled their baby bumps as they stepped out for the star-studded annual Brit Awards at The O2 in London.

The pregnant pals indeed sported a glow as they attended the star-studded event with bandmate Jade Thirlwall.

Perrie wore a gorgeous silk white crop top and flowing skirt as she debuted her baby bump just days after her announcement.

While Leigh-Anne wore a stunning high-neck gown to the star-studded bash.

Leigh-Anne looked stunning in a yellow bikini as she showed off her blossoming baby bump.

At the time, she revealed her hormones are “racing” and her feet are “swollen”.

She penned: “Hormones racing and feet are swollen af but counting my blessings everyday for the miracle growing inside me”.

The gorgeous snaps received more than 807,000 likes from fans, while many commented to gush over how stunning the star looked.

Leigh-Anne admitted that she's had a big craving for Frazzles while pregnant.

She admitted: "Frazzles, I literally ordered a box on Amazon because I was that obsessed, and Fruit Pastilles. They're my three."

Leigh-Anne looked stunning in a nude bikini top with a pair of grey shorts as she sat down outside with her blossoming bump on show.

The hitmaker placed one hand on her back as she leaned away and took a deep breath as Guilty by Sevyn Streeter, Chris Brown and ASAP Ferg played in the background.

"Sunbathing just isn't what it used to be," she wrote over the image followed by a nervous face emoji and a despair face emoji.

Leigh-Anne looked every inch the blossoming mum-to-be as she cradled her bump in a chiffon brown maxi dress for her garden party baby shower in July.

The Shout Out To My Ex hitmaker wore her locks in a chic up-do and opted for barely a scrap of makeup as she kept all eyes on her ensemble.

Meanwhile the garden was decked with stunning floral displays including delicate pink roses and gypsophila to accessorise the huge pastel balloon arch.

The stunning display also featured a crescent moon and "love you to the moon and back" in white neon letters.

Leigh-Anne was also treated to a huge pick-and-mix display with jars filled with retro sweets on a pale grey wooden stand.

Leigh-Anne's due date is unknown, however it is reported she was past the three month mark when she announced she was expecting in May.

On June 7, the star hinted the arrival wasn't far off as she penned: "We get to meet you soon."