Home » Lifestyle » Leikeli47 Uplifts The Streets In This Week's The Playlist

Leikeli47 Uplifts The Streets In This Week's The Playlist 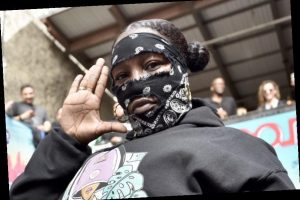 There are mysterious figures in music — MF DOOM, Captain Murphy, Jay Electronica — and then there is Leikeli47. Boasting two epic rap albums with 2017’s Wash & Set and 2018’s Acrylic, she withdrew from the scene for reasons explored on her upcoming effort Shape Up. It has been a long time for myself and fans of the Bed-Stuy lyricist since we’ve heard that heat and her newest single, “Zoom,” came right on time.

The balaclava-wearing, beat-consuming Brooklyn badass has always repped where she came from, which also includes Virginia as well, and our shared story settings have inspired this week’s edition of ESSENCE’s The Playlist. “My culture is my muse,” Leikeli shares when asked about these hometown streets responding to her latest and greatest. “To feel that I have their backs, the same way they have mine, I hope they can appreciate my growth and know that I will always be responsible with our stories. Inspired by deep-rooted street tales like The Wu-Tang Clan’s “Can It Be All So Simple” and Stevie Wonder’s “Living for The City,” Leikeli47 may rep for the block, but behind that mask she raps with the brilliance of a sartorialist. “Stay low. Keep firing. Bet the bank,” she says via email about any solid advice that inspires her music. “If you don’t bet on yourself, then who will?”

In keeping the focus on the music of the streets, this is a dream come true to share our choices together on the eve of a busy 2021 for the genre-defying MC.

Up first for Leikeli is a joint she considers “a timeless bop.” The co-star of The Purple Tape, Ghostface Killah, also comes correct on a record. For “Cherchez LaGhost,” he is completely in his distinctive bag, dropping line after line of pure street classiness. “[This is] one of my favorite songs and short visuals. GFK is a one-of-one,” she says about the Wu-Icon via email.

To double down on spreading love (because it’s the Brooklyn way!) — I am championing the new track from Erick the Architect. The Flatbush Zombies co-founder, rapper, and executive producer channels early ‘90s East Coast vibes on “WTF,” a reflective single with airtight rhymes over soulful beats. With Col3trane on the hook, this is an introspective number anyone could use while navigating these COVID-19-laced streets.

“I can see and feel every color,” Leikeli shares with me when talking about the 1976 #1 dance hit. And she’s right because Cory Daye is still underrated whenever this track comes on. “Sunshower” is what I would call a “forever groove,” or what music writer Peter Shapiro calls as “one of the most fully realized, dazzling artifacts from the Black bohemian intelligentsia.” The energy from this song is enough to keep your block extra sunny no matter the weather.

Elite MCs and certified street scholars, Freddie Gibbs and Big Sean, connect with Hit-Boy for the braggadocios cut, “4 Thangs.” Gangsta Gibbs is unparalleled when it comes to flipping words and birds, and accompanied by Sean Don, these two co-MVPs manage to deftly pass the mic back-and-forth like Magic and Kareem.

For Leikeli’s third pick, she makes the earth flip with “Don Dada,” written and performed by Cakes Da Killa, the wildly popular author of Hunger Pangs. “Culturally urgent and artistically genuine. Cakes is brilliant,” she says about the rapper credited with the “queer explosion” of hip-hop music in New York. This interlude is quite the tease, so be sure to press play on the full version and get your house/dance on and set the streets on fire.

Drill music — whether from Brooklyn, Chicago, or even Ghana — continues to be a force of inspiration for today’s artists. Dutchavelli is a UK act responsible for some of the biggest bops of 2020, including “Only If You Knew” and “I Dunno” with Stormzy and Tion Wayne. On “Zero Zero,” the cheeky-yet-gully number showcases Dutch from the 5th’s high octane flames that only he can deliver, making this release on to add to your rotation fast!

Arguably, Beyoncé’s Homecoming was one of the most dazzling arrays of Blackness seen before Lovecraft Country, and Leikeli is undoubtedly a fan. “I miss the stage and meeting the people,” she says about missing the live experience. “This [Beyoncé] performance satisfies every craving and I love it when she talks her ish.”

Self-proclaimed “Berkeley Superhero” Rexx Life Raj is one of my favorite voices of today’s future-minded sound. A talented master of verse and production, Rexx’s latest release is packed with a great message and props up hype for his next project, California Poppy 2, which exemplifies the street savviness of this son of a Black Panther.

Nipsey Hussle was beloved by the streets in a major way, due to his effort in steering others to the path of prosperity. Leikeli47 exudes similar qualities, speaking to the folx in hoods around the globe, and sharing jewels that help them discover their own passions and accomplish their dreams. “They say every good hero needs her theme music,” says Leikeli to me via email, and what better song than “Last Time That I’d Checc’d” to close out her co-curating of this week’s The Playlist.

Piggybacking on Leikeli’s last pick, Busta Rhymes has delivered an official sequel to his street-defining album, Extinction Level Event, and is worthy of closing out ESSENCE’s The Playlist. “Master Fard Muhammad” is a rewind-worthy cut, featuring Rick Ross, and layers foundational jewels for wisdom and growth, over Terrace Martin’s horn-infused production. This one is not going to disappoint anyone making a better life for themselves from the streets.