Home » Lifestyle » Lewis Hamilton name: Why has he changed his name – the sweet reason behind the decision

Lewis Hamilton name: Why has he changed his name – the sweet reason behind the decision 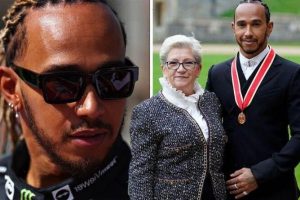 Lewis Hamilton to change his name

Lewis Hamilton will kick start the Bahrain Grand Prix with a new name in a sweet tribute to his 66-year-old mother, Carmen Larbalestier. While it is believed the record-breaking F1 driver is still in the process of legalising his new name, Hamilton’s dedication to his parents and his heritage has already been made very clear. The announcement comes as the Mercedes driver prepares to chase his eighth world championship, but what will be different about Lewis Hamilton’s name if he does steal the top spot?

What will Lewis Hamilton’s name be changed to?

In order to honour both of his parents, the seven-time world champion will incorporate his mother’s surname into his existing title.

Like most people in the UK, Hamilton’s current name follows the age-old tradition which uses the father’s surname on a child’s birth certificate.

The 36-year-old F1 icon gets his famous name from his father, Anthony Hamilton.

Having conquered the industry as both the most successful, and first black F1 driver, Lewis has been a long-standing advocate for equality in the sport which is largely dominated by white drivers.

While the name change is clearly a heartfelt tribute to his supportive mother, Hamilton’s decision is yet another example of his drive to challenge outdated conventions.

Why is he changing his name?

Speaking at Dubai Expo, the Mercedes front-runner questioned the tradition of women losing their surnames when they get married as he announced his decision to change his name.
He said: “I’m really proud of my family’s name: Hamilton.

“Actually none of you might know that my mum’s [sur]name is Larbalestier. “And I’m just about to put that in my name. Because I don’t really fully understand the whole idea of why, when people get married, the woman loses her name.

“I really want her name to continue on with the Hamilton name.”

Over the years Hamilton has revealed he has a close relationship with both his parents – Carmen and Anthony, despite them having been divorced since he was just two-years-old.

Since the start of his professional F1 career in 2007, record-breaker Lewis Hamilton has already undergone multiple changes to his name.

In 2009, Hamilton received an MBE from Queen Elizabeth II just one year after his first world championship win.
Then 11 years later, he was named in the New Year’s Honours list in December 2020.

Since receiving his knighthood from the Prince of Wales in 2021, the world-champion has earned his title as F1 royalty – going by the new name of Sir Lewis Carl Davidson Hamilton MBE.

Hamilton, who was accompanied by his mother for his knighthood at Windsor Castle last December, said he is unsure when the name change will be officially ratified.

He was asked whether his new name will be confirmed in time for this weekend’s season-opening Bahrain Grand Prix, but said he didn’t know.