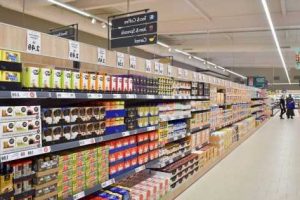 Many people love a bargain, especially on their weekly shop. So it helps to know where you can find the best money-saving deals around.

And luckily, consumer heroes Which? have come up with the handy guide to show which stores are the cheapest.

The association looked at all the high street favourites – including Aldi, Tesco, ASDA, Sainsbury's and Waitrose to determine who came out best when it comes to buying a bargain.

And although people may have their favourites, there was a clear winner when it came to price.

The Which? investigation has confirmed that budget-friendly German retailer Lidl is the cheapest supermarket so far this year.

It just nudged out Aldi while ASDA came in third position.

Which? investigated prices at the stores every day throughout March, checking the cost of 20 food, drink and household items at every major UK supermarket.

This includes items such as apples, eggs and tomatoes, as well as branded goods such as Hovis wholemeal bread.

It also compiled a price comparison basket which consisted of a combination of own-label and branded products, including groceries and household essentials.

The news comes after the Lidl was declared the cheapest in the UK in February – and for the whole of 2020.

News of the cheapest supermarket comes amid a legal row between Marks & Spencer and Aldi which is rocking the retailer world.

M&S is taking legal action to protect its Colin the Caterpillar cake – after Aldi produced a rival called Cuthbert.

M&S is arguing the similarity of Aldi’s product leads consumers to believe they are chocolate cakes are of the same standard.

The UK store claims its rival is attempting to "ride on the coattails" of Colin's success and wants Aldi to remove Cuthbert the Caterpillar from sale and agree not to flog anything similar in the future.