Whatever your view on J.K. Rowling, you’ll likely have plenty to say about her new novel.

The Ink Black Heart, published on Tuesday under the Harry Potter author’s long-running pseudonym Robert Galbraith, is drawing a lot of attention for a plot line in which a female YouTube creator is found dead after being subject to criticism from fans labelling her work racist, ableist and transphobic.

Though The Age and The Sydney Morning Herald have not read these passages, critics who have reviewed the book have said the main character’s arc (aside from the apparent murder) bears a striking resemblance to events from the author’s own life. 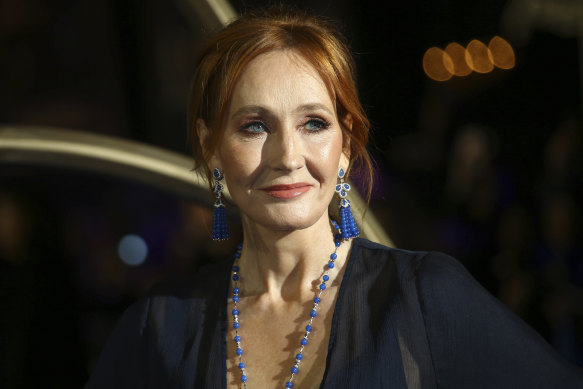 Noting that the book’s character is criticised for “embodying racist or ableist tropes” in her work, The Telegraph reviewer Jake Kerridge wrote, “We don’t have to ask where Rowling gets her ideas from.” Rolling Stone’s Cheyenne Roundtree said, “Rowling’s new novel, The Ink Black Heart … involves a storyline that appears to mirror Rowling’s public downfall.”

Rowling has been subject to much criticism over the years, with many now-grown Harry Potter fans expressing disappointment with elements of her most famous books. The Gringotts goblins, for instance, are widely read as anti-Semitic caricatures, and Rowling is often critiqued as tone-deaf on issues of race (think: the one Asian character being named “Cho Chang”, two surnames from different cultures).

But the biggest complaints that fans have had with Rowling concern her personal statements on transgender rights.

Over the past few years, the author has been outspoken about her concerns on “the new trans activism” and what she sees as an erosion of cisgender women’s rights as society becomes more inclusive and supportive to transgender women.

These statements have been met with sadness from many fans, who felt betrayed by the author of a story they had long cherished as a tale of love and acceptance. (Notably, many cast members from the Harry Potter films also issued statements distancing themselves from Rowling). But Rowling’s views on this issue are regularly met with anger too. She regularly receives hateful messages on social media, has been subject to death threats, and had her address revealed by protesters online.

It’s these latter experiences which seem to have informed her latest work. The YouTube creator who is found dead in The Ink Black Heart, the book’s description reads, is being “persecuted by a mysterious online figure who goes by the pseudonym of Anomie”.

In a Q&A on the Robert Galbraith website, however, Rowling says the book “certainly isn’t created from [her] own experience”.

Instead, she says, some things that happen in the book coincidentally also happened to her during the writing process: “I would like to be very clear that I haven’t written this book as an answer to anything that happened to me … Sometimes life imitates art more than one would like.”

Rowling also went on to distance the fandom depicted in the novel from the one she built through Harry Potter.

“The Potter fandom, by and large, has been amazing to me,” she wrote. “[It is] incredibly supportive, and I still receive tonnes of love.”

The Ink Black Heart is the sixth book in Rowling’s ongoing Cormoran Strike series – a collection of detective novels, the first four of which have also been adapted for TV by the BBC. The fifth instalment, Troubled Blood, also faced similar scrutiny regarding Rowling’s regard for trans women.

That book featured a serial killer who routinely dressed in women’s clothing, which many understood as a transphobic storyline. At the time, English journalist Paris Lees (who is herself transgender) said it stoked “fears around the myth about ‘men who dress up as women to hurt women’.” And many trans and non-binary authors noted that, in reality, transgender people are disproportionately likely to be the victims of violence.

These kinds of conversations are bound to crop up again in light of this new novel – but if history is any guide, it won’t hurt her hip pocket. Troubled Blood stormed to the top of the UK book charts amid similar controversy – and had extremely strong Australian sales too.