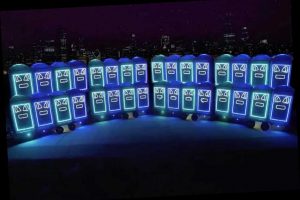 Parrot replaces scissors in this house

An Indiana sanitation company has devised a fitting way to celebrate the end of a truly crappy year: by having a choir of Porta Potties sing “Hallelujah.” Or should we say “halle-loo-yah?”

“HALLELUJAH, the end of 2020 is finally here!” tweeted Gary-based Service Sanitation, which rents out its signature blue Porta Potties to events across the Midwest.

In the 2-minute clip, 32 lit-up portable toilets dubbed the “Jingle Johns” can be seen belting out a hilarious techno remix of “Hallelujah” in front of the dramatic Chicago skyline.

If that wasn’t enough, the honey bucket band even sprinkles in a few quotes from the cinematic Christmas classics “Elf” and “National Lampoon’s Christmas Vacation.” The performance has apparently set a record for “the most animated faces on a single holiday light display,” per the rent-a-john firm’s Twitter account.

This isn’t the Jingle Johns’ first time wishing everyone a Merry p – – smas. Service Sanitation marketing manager Stevie “Dee” Dykstra first devised the idea in 2013, when the firm had 40 porta potties cover a Trans-Siberian Orchestra song for a clip they sent to customers on Christmas, Madison.com reported.

Every holiday season since, the group has released a new video, in which they’ve showcased everything from rapping to Snoop Dogg to getting down with Disco Santa. Meanwhile, a quartet of caroling crappers — named Porta Paul, Carl Can, Buddy Blue and Linda Loo — tour across the midwest, and the Jingle Johns can even be requested to appear at various events, per the site.

“It’s all about continuous innovation and achieving a new ‘wow factor’ each year,” said Dykstra.

END_OF_DOCUMENT_TOKEN_TO_BE_REPLACED

END_OF_DOCUMENT_TOKEN_TO_BE_REPLACED
We and our partners use cookies on this site to improve our service, perform analytics, personalize advertising, measure advertising performance, and remember website preferences.Ok