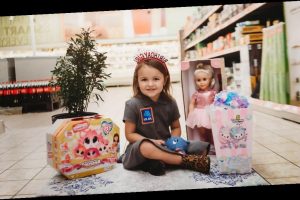 Most four-year-old's love playing with their dolls or their cars, but not Saylor Singleton.

This little girl loves hunting out the best deals with her mum at their local Aldi store.

Her mum, Meaghan Singleton told Insider how ever since Saylor was big enough to sit in the shopping trolley, she would always ask "Aldi, right?" when it was time for the food shop.

So when it came to planning her recent birthday, Meaghan decided to throw her an Aldi-themed party to celebrate her love for the budget supermarket- and it was a huge hit!

The first step in the party planning process was to find an embroiderer who could sew the company badge onto one of Saylor's polo dresses.

Meaghan managed to contact a crafter through a Facebook group, who was more than happy to help.

She even organised a professional photoshoot in their local store, so she could decorate using the photos.

"It is was so great seeing all the employees love that she loves Aldi as much as they do," she continued.

But it was Meaghan's attention to detail when it came to her Aldi party favours that really stood out.

She used Aldi's marketing materials as inspiration for "the cutest birthday girl 4 years running" poster, and made numerous "Aldi finds" signs with photos of Saylor over the years.

She also incorporated money – for the trolley – into the party as "cart cookies" and served the food out of cardboard boxes just as Aldi does.

Meaghan watched Saylor's eyes light up when she first entered the room, as "She ran around saying 'I love Aldi'."

But it wasn't just Saylor who was impressed by the party, most of the guests were frequent Aldi shoppers too, so her hard work definitely did not go amiss.

Meaghan posted pictures of the party to the ALDI Aisle of Shame Community Facebook page, and told everyone how much of a success it was.

Soon enough the post had over 900 comments of people saying just how amazing the idea was.