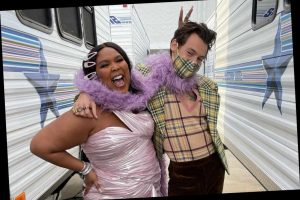 If the only thing the Grammys ever gave us was this pic, it’d be enough.

Lizzo caught up with Harry Styles backstage at the 2021 Grammys after his win for Best Pop Solo Performance (for “Watermelon Sugar”), posting a pic of their moment to Instagram with the appropriately ebullient caption, “HARRY WON A GRAMMY!!!!”

Lizzo, 32, wasn’t up for any Grammys this year, but she was a delightful presence at the odd, partially-outdoor festivities, reminding everyone that she picked up three awards last year and dropping some profanity early on in the show.

Styles, 27, may be the MVP of the 2021 Grammys. He picked up early points in fashion circles for his stylish boa and leather suit, and the plaudits continued for his performance of “Watermelon Sugar.” He also briefly sent Twitter into investigative mode when he dropped his own bit of profanity during his acceptance speech, which got bleeped.

And fans spotted Taylor Swift nodding in support of Styles after his win, suggesting the pair’s potentially-awkward dating history has been conquered, like everything else, by “Watermelon Sugar.”