Lockdown to extend but zero cases not target to lift curbs 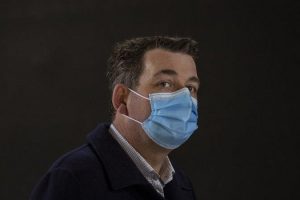 The state government is preparing to extend Victoria’s lockdown by at least three days and is unlikely to ease restrictions until most emerging cases have been in isolation for their entire infectious periods.

Premier Daniel Andrews confirmed the state’s stay-at-home orders, which had been due to end at 11.59pm on Tuesday, would be extended, but said the length of the extension was still being considered. 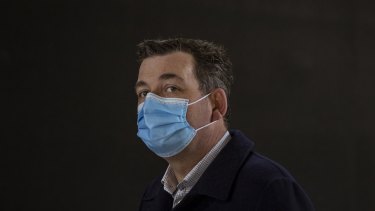 A government source speaking on the condition of anonymity said to expect an extension of at least three days but that the lockdown could also be extended into next week.

Mr Andrews said the government was not shooting for a run of zero cases before lifting restrictions but hoping for no mystery cases and for future cases to be isolated for their infectious period.

“That would be the perfect outcome,” he said. “Sometimes you can achieve that, sometimes you can’t. If you can’t, then you have to make a really challenging risk judgment about … what’s the risk if we open up under those circumstances.”

Of Monday’s 13 cases, one was a contact of a Mildura man who attended a Carlton-Geelong match at the MCG, four dined at the Ms Frankie cafe in Melbourne’s Cremorne, one was a contact of a case who travelled to Phillip Island, one is connected to the Young & Jackson pub, two are students at Trinity Grammar in Kew and one is connected to Bacchus Marsh Grammar. One of these cases was fully isolated for all of the time they were infectious.

Four new cases that will be included in Tuesday’s caseload were in isolation in the days leading up to their positive test and were unlikely to have spread the virus to anyone outside their home. As the lockdown extends, health officials hope all cases will fit this mould, giving them confidence the virus is not spreading unchecked.

Announcing the state’s second lockdown extension in as many months, the Premier said settings in regional Victoria would continue to mirror those in the city, with almost 16,000 Victorians in hard quarantine as close contacts of positive cases.

Test results and case investigations overnight would determine how many days were required to extinguish the outbreak, Mr Andrews said, as the government weighed up tougher border restrictions and the safety of allowing large crowds at sporting events.

COVID-19 response commander Jeroen Weimar said two individuals unwittingly acted as super-spreaders of the virus during the current outbreak, which was spawned by removalists from NSW.

One is a 60-year-old man from the apartment block attended by the removalists. This person passed on the virus to his parents, a social contact and people at the MCG and Young & Jackson pub, now at 12 and seven cases respectively.

A Trinity Grammar teacher who picked up the virus has also transmitted it to a significant number of others at the European Championship soccer final viewing at a CBD pub, Ms Frankie’s cafe and the AAMI Park rugby match. The person is believed to have passed on the virus about a day-and-a-half after picking it up, which Chief Health Officer Brett Sutton said was quicker than with previous variants.

Mr Andrews insisted his government’s decision-making was not more cautious in light of the large NSW outbreak, and warned of the risks of reopening before suppressing the fast-moving Delta strain.

“It would be perhaps a few days of sunshine, and then [there would] be a very high chance we’d be back in lockdown again; that’s what I’m trying to avoid,” he said.

“We have made great progress and we have avoided 1000s of cases. Knowing what we know now, lockdown was the right course.

“If you think about it like a fire, we’ve got a containment line, we’re making significant progress, but it’s not out yet.”

Professor Sutton said there was no guarantee the state could get on top of an outbreak spurred by the Delta variant. He said the longer lockdown was needed to avoid many thousands of cases similar to those seen in other nations that have lost battles to suppress Delta outbreaks.

The first case of COVID-19 transmission has emerged from the Crafty Squire pub in the CBD that hosted a viewing of the European Championship final. Health officials are concerned about this case because the soccer match occurred several days before the lockdown began and people who attended the event spent several days going about their daily activities.

Transmission at football and rugby matches at the MCG and AAMI Park is driving a significant proportion of the spread.

Professor Sutton said his public health team would need to reassess the safety of mass gathering at stadiums after a rugby spectator tested positive despite sitting in a section of AAMI Park not previously believed to be in danger.

“The Delta variant shows that transmission within stadia absolutely occurs. We think there’s been outdoor transmission, probably the MCG and at AAMI,” he said, adding that more MCG patrons than first thought were now deemed at risk of infection.

“We’ve got individuals who were not seated together. There’s no evidence that they’ve attended a food venue together, either. We think it’s a pinch point going into the stadium outdoors.

Professor Sutton praised what he called a “terrific” new vaccination advertisement created by the Melbourne Symphony Orchestra. The social media campaign features performers such as Tim Minchin and Rhonda Burchmore spruiking mass vaccination as the path back to enjoying creative arts like live music and theatre. The federal government has been repeatedly criticised for its two vaccine advertisements.

“I don’t think we need to push people to vaccinate; there’s a lot of people who are ready to step up,” Professor Sutton said. “But something that frames it in a way that makes people see exactly the world that we’re trying to move to is a good thing.”

The lockdown extension is another blow to CBD businesses and lord mayor Sally Capp called for JobKeeper to be reinstated and national targets for the level of vaccinations required to let the country “open up and live with the virus”. The federal government has commissioned the Doherty Institute to develop such targets.

“After more than a year of lockdowns there is still no ‘freedom day’ on our horizon, which means there is no hope for our small-business owners and workers,” she said.

More than 86,000 Victorian businesses have received state government grants that were announced on Friday totaling about $180 million.

Professor Sutton said there was additional support being provided to assist the public health effort in Mildura, but Mr Andrews said he had received no advice about a shortage of testing kits.

“In fact, we’ve added to the capacity, which is really important because we want people who’ve got symptoms to get tested,” he said.

“We’re not inviting the entire community to get tested as we did with Shepparton last year. We hope it doesn’t get to that; we don’t want people to flood the place.”

New data has revealed that just five people in Melbourne’s earlier Delta and Kappa outbreaks this year had been fully vaccinated before testing positive. Of those five, three had only been recently vaccinated with their second dose, which means they may have not been fully protected.

The information released to The Age by the Victorian Health Department, showed that 132 of the 149 people who caught coronavirus in the outbreaks from May to Tuesday last week hadn’t yet received any coronavirus vaccination, or their vaccination status was unknown. A further 12 had received one dose of their vaccination, but five of these had only been recently vaccinated.