Look Back at All of Kim Kardashian’s Epic Birthday Parties 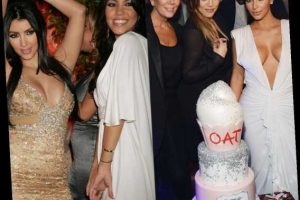 Put simply, the Kardashian-Jenners know how to throw a good party—especially when it comes time for Kim Kardashian's birthday.

This year, the Keeping Up With the Kardashians star is turning 40(!), and until we know what Kim and co. have in store for the momentous occasion on Oct. 21, we're looking back at all of her iconic past celebrations, from countless trips to Las Vegas and subsequent nights out at TAO to low-key excursions to the most beautiful and relaxing of destinations.

There's also the birthdays that were spent right at home in California, including her 33rd, which is almost certainly among the most meaningful of celebrations for Kim.

Since then, Kanye's continued to spoil Kim every year, whether it's with elaborate flower displays or extremely generous (ahem, $1 million) charity contributions!

The mom of four is also a big fan of girls' trips, and has traveled everywhere from Bali to Palm Springs with her mom Kris Jenner and sisters Kourtney Kardashian, Khloe Kardashian, Kylie Jenner and Kendall Jenner in tow.

Look back at all of these vacations, in addition to surprise parties and outlandish soirees, by scrolling through the below gallery of Kim Kardashian's epic birthday celebrations!

And don't miss E!'s Keeping Up With the Kardashians marathon Wednesday, Oct. 21 starting at 12 p.m. followed by Kim Kardashian's 40th Birthday Special at 10 p.m., only on E!

You can also relieve all of the iconic Kardashian-Jenner moments by bingeing past seasons of KUWTK on Peacock.

Happy 27th birthday! Kim Kardashian blew out her 27th birthday cake candles while having an epic rager at Les Deux on Oct. 21, 2007 in Los Angeles.

Rocking out with sis Kourtney Kardashian, Kim partied the night away at Les Deux.

A year later, Kim blew out a sparkling purple cake at her 28th birthday party at LAX Nightclub in Las Vegas, Nevada.

The Keeping Up With the Kardashians star celebrated her 29th birthday at TAO nightclub in Sin City. Then-boyfriend Reggie Bush couldn't make the bash, but she flew to see him in New Orleans the next day.

Before there was Kanye West, there was Kris Humphries. Kim celebrated her 31st birthday at Marquee Nightclub inside The Cosmopolitan of Las Vegas with her new husband Kris, and was joined by her sister Khloe Kardashian and her then-husband Lamar Odom, mom Kris Jenner and Kim's former Dancing with the Stars partner Mark Ballas.

The family was mobbed by fans as they made their way to Marquee after enjoying signature Italian dishes in the private dining room at LAVO where they toasted with Midori Sour cocktails and Champagne.

Kim and Kanye were spotted making out during their trip to Rome, Italy for the reality star's 32nd birthday.

Talk about a great birthday present! Kanye made his message clear when he proposed to his lady on her 33rd birthday in front of friends and family at AT&T Park in San Francisco.

Days after getting engaged, Kim hit up Vegas for a Sin City bash in her honor at TAO on Oct. 25.

Another year, another Las Vegas birthday party! Kanye and Kim celebrated Kim's 34th birthday at TAO Nightclub at the Venetian on Oct. 24, 2014.

The A-list couple got their party on for Kim's big day.

Kanye took his pregnant leading to Cinépolis Luxury Cinemas at The Promenade in Westlake, Calif., where the proud mom thought she was just going to see a movie. Instead, her man helped organize a surprise 35th birthday party with more than a few famous faces, including sisters Kendall Jenner and Kylie Jenner, along with Kylie's then-boyfriend Tyga.

Caitlyn Jenner, Kris and Corey Gamble were also there to surprise Kim with a showing of Universal Pictures' Steve Jobs movie.

At the surprise party, Kim was treated to this extravagant cake, courtesy of Kanye.

Kylie posted this sweet photo as a tribute to birthday girl Kim on Oct. 22, 2015.

That same year, Kourtney posted this throwback photo with the caption, "She has been my partner for life. We always seem to end up on the craziest adventures together. I love and admire the person you have become and learn from you every day. Happy Birthday!"

The mama made sure to spend some time with daughter North on her 35th birthday, too.

In 2016, a few weeks after these photos were taken, Kim celebrated with family in a low-key way, sans social media, while healing from her robbery in Paris.

At the time, a source told E! News, "Kim's birthday is going to be a very quiet celebration this year," the insider said. "She has no plans on making a big bash. She will have an intimate birthday with her immediate family."

"She is not in any celebrating mood yet," the source told us at the time. "Kanye is trying to do whatever he can to make her feel better, but it's just the constant memories of the robbery that keep on messing with her."

Kim celebrated her 37th birthday with a stay at the Amangiri in Utah.

Back in L.A., the celebrations continued with family and friends at a Lebanese and Armenian restaurant.

Kim posted a video of the bash on Snapchat, showing a smiling Kanye sitting next to her, and Kendall on his other side.

Kanye pulled off yet another surprise for Kim's birthday—this time, for her 38th, she woke up to the sight of a male musician playing a grand piano in their house, as well as a giant display of pink, exotic flowers.

"Kanye's the most creative when it comes to sending me flowers for my birthday!" Kim wrote at the time. "love you so much babe."

Kim also celebrated her 38th birthday by taking a grand trip to Bali with Khloe, Kourtney and all of their little ones.

At the time, a source told E! News the sisters "were so excited to be all together in a beautiful new place with so much to see."

The insider revealed they stayed at the luxurious Soori hotel, "in a beachfront estate right on the sand" for five days, which cost an estimated $30,000.

Here, True Thompson and Chicago West were taking in the sights of the lush landscape!

The vacation didn't just consist of tanning, swimming and trips to the beach. While exploring Bali, Kourtney and daughter Penelope Disick paused to take a photo in front of a historic landmark.

Kim kicked off her 39th birthday celebrations with a girls trip to Palm Springs, Calif.

"Kim told her closest friends and her family that she did not want to celebrate her birthday this year or make a big deal out of it," a source shared with E! News at the time. "Kim was very happy about it being low-key. She was really excited that she was able to relax all weekend and hangout with her closest girlfriends at Kris Jenner's house."

While Kendall and Kris both had prior commitments leaving them unable to attend, Kourtney, Khloe and more familiar faces were able to participate in the celebration planned by Allison Statter.

Kim got dolled up for her birthday dinner with help from none other than Kylie Jenner!

"So for my birthday, I have a special makeup artist today," Kim said on her Instagram Story video, as her baby sis did her glam, using KKW Beauty products, of course.

The birthday girl's table setting included napkins reading "happy birthday," a necklace that spelled out "birthday babe," a pink party hat with "birthday princess" written on it, sunglasses that read "so fab" and so much more!

The Palm Springs trip may have been for Kim's birthday, but she still wanted everyone to leave with a few gifts. As seen on social media, Kim gave her sisters and friends goodie bags filled with Skims products, new Yeezy slides and some KKW Beauty perfume.

Kanye's 39th birthday present for Kim may have been his best yet: a $1 million donation to various prison reform charities.

Kim took to Instagram to share the donation certificate, which was also was signed by kids North, Saint, Chicago and Psalm. "A donation of $1 million has been made in your name," the document read, noting the #cut50, Buried Alive Project and Equal Justice Initiative and Anti-Recidivism Coalitions organizations would be receiving the gift.

Relive even more birthday fun by catching up with Keeping Up With the Kardashians on Peacock.

(E! and Peacock are both part of the NBCUniversal family.)