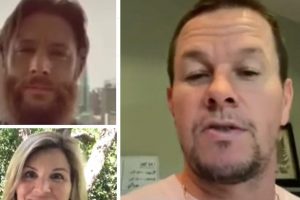 One teen received quite the unexpected surprise from her father to celebrate her high school graduation this year: a video filled with stars celebrating her accomplishment.

A graduating senior named Isabelle has gone viral after uploading the footage to TikTok this week. So far, the video has been seen more than 17.5 million times, racking up 5.5 million likes and over 80K likes in just three days.

“Me thinking my dad wasn’t doing much for my graduation,” she stated at the top of the clip, before clips from a parade of celebrities shared their congratulations.

The most surprising faces to pop up, however: Lori Louglin and Drake Bell. Loughlin’s well-wishes come after she served time for conspiracy to commit fraud in connection to the college admissions bribery scandal. It’s unclear when she filmed her message, but the irony of her inclusion here was not lost on the commenters.

Bell, meanwhile, was just charged with attempted endangering children and disseminating matter harmful to juveniles in connection with an incident on December 1, 2017. He pled not guilty.

In a pair of follow-up videos, Isabelle and her father Jay explained how the video came to be.

“This is my dad. He’s Jay, he’s my dad. He’s not a producer. The only experience he has on the TV is ‘Wipeout,’ he was on Wipeout,” she explained. “He’s an IT guy for the Marines, we didn’t use Cameo. He emailed a lot of people.”

“It’s not that deep,” she added in another video, before Jay explained he first made a list of “all the actors that Faith grew up watching” and started emailing contacts for them on Thursdays. He said that’s “when you get responses from people.”

Faith also explained that he got all of the contact information from LinkedIn, connecting with producers, as well as celebrity publicists and agents.

Some celebrities opted to send gifts to Faith instead, including a handwritten note from Lin Manuel-Miranda, signed photos from Daniel Radcliffe, Mike Rowe and Robert Downey Jr., Matthew McConaughey and Barack Obama’s book, Ellen DeGeneres merch and a Garth Brooks video that didn’t make it into the initial video.