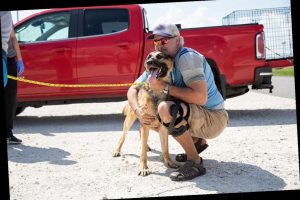 Savage and his owner, Iraq war veteran and former paramedic Henry "Andy" Roach, are together again thanks to the ASPCA.

In late August, with Hurricane Laura barreling towards his home in Sulphur, Louisiana, Roach prepared to evacuate. As he was packing up essentials, Roach, 51, realized his truck would only fit himself and the four other adults he vowed to keep safe, including his 88-year-old mother, leaving no room for his rescue German shepherd Savage.

Roach made the difficult decision to get his human family and friends to safety and then return for Savage. Unfortunately, when Roach planned to make his way back home and pick up the dog, he learned from a neighbor that the storm had collapsed part of his backyard fence, allowing Savage to wander off.

The owner was heartbroken to be without his 6-year-old furry friend and unsure of his pet's safety. Thankfully, Roach later learned that shortly after Savage escaped, he was spotted by a Good Samaritan and picked up by Calcasieu Parish Animal Services. The shelter, caught in Hurricane Laura's path, sustained serious damage during the storm, so the ASPCA deployed a disaster response team to the local shelter to help the facility look after the animals under its care. Savage stayed at an ASPCA emergency shelter until Roach was able to reunite with his loyal companion. At the reunion, Savage ran towards Roach, with his tail-wagging, the second he laid eyes on his owner. Roach was "ecstatic" to see Savage again and was especially pleased to see no serious harm had come to his loving dog. "I was ecstatic to see Savage not only alive, but in good spirits and healthy," Roach said in a statement to PEOPLE.

"It’s gratifying to see pets go home after such a stressful time. He was definitely glad to see Andy," Jessica Rushin, the ASPCA's senior director of placement partnership, said of the reunion she witnessed. The ASPCA hopes that Savage's story inspires other pet owners to include their pets in their disaster preparedness plans, so no one will be forced to make the difficult decision Roach had to endure. ASPCA has lifesaving tips on how to easily incorporate your pet into your disaster plan.

END_OF_DOCUMENT_TOKEN_TO_BE_REPLACED

END_OF_DOCUMENT_TOKEN_TO_BE_REPLACED
We and our partners use cookies on this site to improve our service, perform analytics, personalize advertising, measure advertising performance, and remember website preferences.Ok