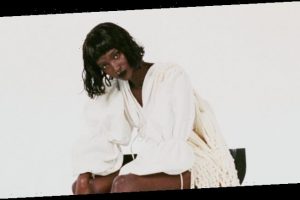 Seventeen years ago, the Congolese-Belgian musician Lous and the Yakuza, née Marie-Pierra Kakoma, was seven years old and writing around 10 songs a week. She’d sit inside her childhood home in Belgium, and furiously jot down whatever lyrics came to mind every day. Her parents, both of whom were prominent doctors in the country, reminded her of the motto that guided them, a saying repeated often among her extended family: “If you want to be a cobbler, be the best of the village.”

“I was not gifted at all,” Kakoma said recently during a video call from Paris, where she was rehearsing for an upcoming digital performance. “My parents thought you only make art when you’re gifted. They were like, ‘You’re not even a good singer. We’ll be bad people if we push you in that direction.'”

But Kakoma, who is now 24 years old, had a vision, even if none of her family and friends saw it at the time. She might not have been bestowed with a gift, but she’d inherited her parents’ work ethic and tenacity, and she wanted to prove them wrong. So she wrote to practice and hone her craft—even at an age that hadn’t yet reached double digits.

This sense of discipline set the tone for the rest of Kakoma’s career, which is just blossoming in the United States, after flourishing for years in Europe. The videos for her songs “Dilemme,” “Solo” and “Bon Acteur” have over 10 million views between them, and French brands have taken note of her standing—when we chat over Zoom, she’d just wrapped walking the Louis Vuitton runway show at Paris Fashion Week, and she is one of the faces of the brand’s campaign this season. After writing seven EPs over the past four years, Kakoma is set to release her debut full-length album, “Gore,” on Friday; it was produced entirely by El Guincho, best known for working on Rosalía’s “Malamente.”

The title of her record references horror movies, whose bloodiest and most vile scenes somehow turn into campy comedy. Kakoma said this is the story of her life—one that has been marked by pain and trauma, but has become something she can laugh about now.

“It bothers people, because I was always different, and I couldn’t care less,” Kakoma said. She took a hearty bite out of an apple and adjusted her headphones, which sat on top of her bucket hat. “In general, I’m a very uplifted person. I’m just going through the waves of life.”

One year after Kakoma was born in Lubumbashi, Democratic Republic of the Congo in 1996, the First Congo War occurred—not one year later, the Second Congo War began. During that time, her mother was imprisoned for two months. Kakoma’s father secured her mother’s release, and, along with her three siblings and mother, four-year-old Kakoma fled to Belgium. Her father remained in the Congo, where he worked as a gynecologist and a director of a medical university. While his family was in Europe, he became increasingly involved in politics. At the university, he pushed for prospective students in more remote areas to have greater access to an education in medicine. He attempted to enact changes which rattled the powers that be—they tried to turn his head with bribes, which he denied. He was nearly killed as a result.

Meanwhile, in Belgium, Kakoma’s mother, who’d been a top pediatrician at home in the Congo, found herself working as an assistant to the assistant of a dentist, living in a cramped apartment with her four children, alone.

“She was like, ‘I have a degree and I cannot practice it. What the hell am I doing here?'” Kakoma explained. “She was getting depressed. She couldn’t take it.”

In 2005, when the singer was nine years old, her parents made the decision to send Kakoma and her little sister to Rwanda, which was still recovering from the turmoil of genocide. (Her mother and father informed them they’d be going to the country for “a vacation.”) Eventually, her parents and two other siblings joined the children in Africa, and they relocated to Belgium permanently in 2011. Throughout this time of strife and upheaval, Kakoma said she was largely “living her best life,” as she put it, relatively unaware of the tumult happening around her, which her parents tried to keep under wraps. She was a kid. She’d play in the streets with her friends, wake up at 5:30 a.m. to sneak into the living room and watch Japanese anime on television. Kakoma listened to Whitney Houston, the Mali-born French pop singer Aya Nakamura, and the classical music that her father loved. Then she’d go to her room and write songs with a regimented, obsessive nature that belied her age.

At 15, Kakoma began reaching out to any Columbia Records employee she could find over e-mail, seeking a label to make her home. Meantime, she booked local gigs all over Brussels and uploaded her music onto Soundcloud. An A&R executive at Sony in France took notice of her singular sound—one that mixes trap, R&B, and something else that’s uniquely hers—and signed her. Suddenly, her family—who had kicked her out of their home at 18 for pursuing music, leaving her to sleep in various studios around the city between recording—saw her as legitimized. Friends who had doubted her abilities when she was broke and making music for the internet came back around, asking her why she was gone all the time.

“I’ve been judged by my friends, my parents, even the music industry,” Kakoma said. “When people put me in a box, I used to destroy the box and get out of it. Now, I’m happy with the twists in life.”

This acceptance of, and even appreciation for, the dichotomies of her life comprise the stuff of Lous and the Yakuza’s songs, too: “Dilemme” speaks of Kakoma’s desire to be alone, to free herself “of the chains and the people I love.” But at the same time, the musician says she’ll often find herself alone in a hotel, praying for the ability to teleport to Brussels to spend time with family and friends.

Although Kakoma insists she “makes no sense,” the very human experience of conflicting feelings unifies her music, and might be one of the reasons she’s gained a large fanbase in such a short span of time. People can relate to it, no matter what language it’s in. Kakoma points to the Mozart and Chopin she listened to as a child, which contained no lyrical content at all; she still could feel the emotions that the swelling crescendoes and melodies wrought within her. When she first heard “I Will Always Love You,” by Houston, she was only beginning to learn English alongside the languages she already spoke: French, Dutch, Kinyarwanda, and Kiswahili. But every feeling Houston sought to evoke struck Kakoma, hard. (“I was like, ‘What the hell?'” she remembered. “What is this coming straight to my heart?”) On a subconscious level, she admitted that she makes music that will resonate with people who hail from any country in the world. (And her fans, a healthy portion of whom do not speak French, can rap along to “Bon Acteur’s” every word.)

She feels at home nowhere and everywhere in the world at once—partly due to her international upbringing, and in part, because she came up online, where musicians make genre-less music that spans all borders.

“I don’t fit at all in the classic Rwandan ways, which are very introverted and quiet—the whole population is like that,” she said. “Congolese, they are bold, they’re different—I was raised with complete opposites. They’re very extra, they’re very loud, my God, just like me—loud as hell. They love to party. There’s a very happy feeling in the country, but there’s so much bribing and corruption is everywhere, at every level. In Belgium, my style, the way I spoke, nothing matched. They just looked at me like, ‘Oh, you black.'”

Kakoma maintained that writing music was not her release—it wasn’t cathartic, nor was it a way to cope with the adversities she faced growing up. It was a way to be better, to succeed, and surpass whatever standards those around her cast upon her life. Along the way, her wins became her own points of pride.

“I was judged everywhere I went,” the singer said. “But that’s why, now, I want to remain a child of the word.”

END_OF_DOCUMENT_TOKEN_TO_BE_REPLACED

END_OF_DOCUMENT_TOKEN_TO_BE_REPLACED
We and our partners use cookies on this site to improve our service, perform analytics, personalize advertising, measure advertising performance, and remember website preferences.Ok