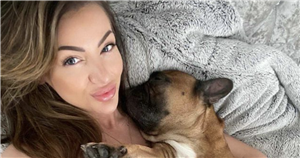 The 27 year old, from Bournemouth, who previously described how she was planning on stealing Toby from Chloe Burrows at the "first chance", has also flaunted her impressive collection of tattoos.

Tattoo artist Abigail has a portrait of her French Bulldog Zeus, which she designed herself, on her ankle and described how it is her "favourite" work of art.

Abigail also has roman numerals "IV", meaning four, underneath the portrait of her pup.

Captioning the finished design on Instagram, she penned: "Today I decided it was time I tattooed my favourite little man on myself. As much as it sucks self inflicting pain on yourself, it’s definitely just become my favourite tattoo I’ve got."

The brunette beauty also has a stunning rose design on her right shoulder and forearm which were designed by London-based artist Annabelle Luyken.

Taking a closer look, we can also see the word "grateful" inked on her skin among the floral pattern.

Abigail, who has 37,700 followers on her tattoo artist page, has also revealed her intricate back tattoo which consists of a dreamcatcher and detailed design.

It comes after a dramatic recoupling which saw Toby Aromolaran, who had been couple up with Chloe Burrows, pick new bombshell Abigail, who previously said she would "steal him".

While Hugo decided to save Chloe, 25, from being dumped after Toby's shock decision and picked her to be coupled up with in the villa as he lamented the semi-professional footballer's actions.

Hugo said during his speech about Chloe: "If I'm completely honest, she doesn't deserve to be treated how she has been in these past 24 hours. I firmly believe a lot of this test stuff is complete bulls**t.

"She deserves someone honest, communicates with her and who knows what could happen, stranger things have happened. So the girl I would like to couple up with, is… Chloe."

Elsewhere, talking after her exit, Georgia said of whether she would do anything differently in the villa again: "No, not at all. It was really tricky to go in and only have the one person I was interested in."