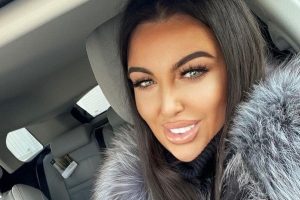 Love IslandstarLuca Bishhas been under fire in recent episodes of the ITV dating show after his behaviour towards Tasha Ghouri sparked concerns.

Following his latest interactions with Tasha,Amber Gill has slammed Luca, 23, inciting a row over social media with his sister . On Twitter, Amber, 24, wrote: “Tasha thought Luca was her best mate????????? Luca is public enemy no1 equal with Dami #loveisland.”

Amber went on to claim that Luca’s sister Claudia Bish had jumped on her Instagram live and addressed her comments, which allegedly subsequently led trolls to send her “death threats” – though the comments have been deleted now.

Claudia is Luca’s only sisterand according to her TikTok she describes herself as a “CEO” – where she has racked up 139,000 followers.

She often posts videos to the account of her life including two where she explained to her followers what her day as a “female CEO” consists of.

While the stunner hasn’t detailed exactly what her position is, it's thought she works in the talent or influencer management industry.

Luca and Claudia, from Brighton in East Sussex, have an incredibly close bond. When he first entered the show, fans were leftpuzzled by his 1995 tattooon his stomach, as it does not equate to his age of 23.

However, it has since been revealed as the year his sister was born.

“It was really sad because after her comments on my live people started sending me death threats so it's just a vicious circle you can't control crazy people wanting to hate I understand she's upset and I hate that but all my tweets are comedy only.

She continued: “I gave his family no stick. She came onto my live when I wasn't even talking about love island. They shouldn't look at my tweets as it's all hyperbole that's my sense of humour I don't genuinely dislike anyone on the show and it's never that deep.”

Claudia, who handles her brother’s account currently, addressed his behaviour earlier this week, issuing a statement after Luca's reaction to the Movie Night clips.

A response written on Instagram Stories said: “I want to apologise on behalf of Luca for his insensitive reaction on last night’s episode. I know that when he watches it back, he will be embarrassed and deeply apologetic.”

The post went on to expose trolls who had sent the family “death threats” and thanked fans for their support.