As we settle down to peruse the menu at Fratelli Paradiso, art curator and writer Juliana Engberg remarks, "This is really a one-stop shop – if you sit here long enough, you will see everyone you need to". How true. In two hours at the casual Potts Point bistro, our lunch is frequently interrupted by passing arty types. Here's one now, waving a paper bag and calling out, "I just bought your book". And here's well-known artist Susan Norrie, just back from Paris, stopping at our table to chat about jet lag and launches. Next in line is curator Barbara Flynn, with news of Swiss art sensation Pipilotti Rists' upcoming arrival in Sydney to commission a new work ("she's staying in an Airbnb in Redfern"). The launch is a picnic, says Flynn. "You must come! It's vegan."

Later – "I did not set this up!" Engberg says – two young art curators materialise by our table, apologetic but excited. One has bought Engberg's En Route as a going away gift for her friend and is hoping for a signature. It's a small book, a meditation on meandering away from the GPS. 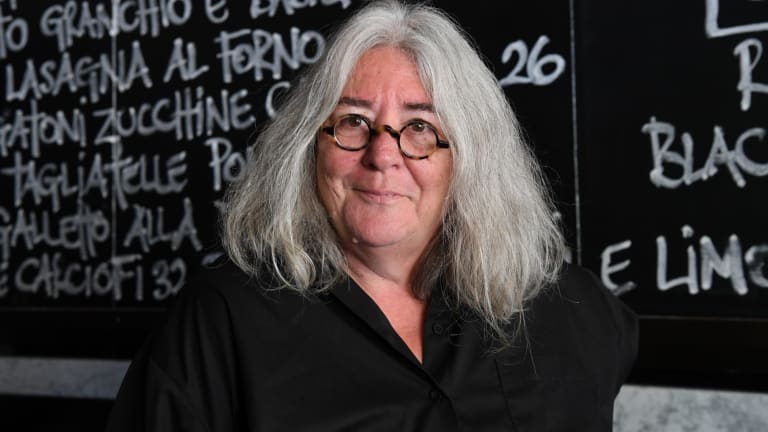 Juliana Engberg: “I needed to do something that fed my intellect.”Credit:Peter Braig

The curator takes all this in her stride. She is a confident woman and full of ideas. "Do stop me if I babble on. I tend to use a lot of punctuation when I talk!"

Engberg is one of Australia's foremost art curators, currently working with contemporary artist Angelica Mesiti on Australia's contribution to the 2019 Venice Biennale, which opens in May. Not that she can say much about that. 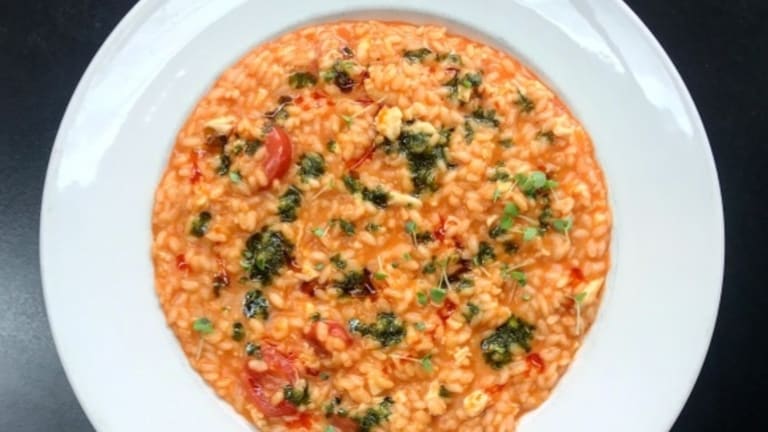 "Every country keeps the details top secret. You want people to come and you don't want to lock yourself in. But I can tell you that Angelica's work is so right for the conversation we are having right now about closing doors and being a less generous society. She is very gentle, poetic and her work allows people to find their own interpretation. We survive better if we come together. If we can use the new energy [of migrants] we will be so much better off than if people are just sitting on their bar stools blathering on like pork chops. But here I am blathering on right now from my soapbox."

We decide to share an entree of buffalo mozzarella with tomatoes. It will look good in the photograph. "I have to worry about colour, I am an arty person. I don't want to be drab." (Her arty credentials are underlined by her "uniform" of a loose black shirt and pants set off by quirky flat shoes and statement glasses.) The salad arrives promptly, it's very good. Particularly the colourful yellow tomatoes.

We also both decide on risotto with spanner crab, Calabrian chilli and basil. "A nice luncheon dish. Venetians always have risotto so it's appropriate." No wine. Engberg doesn't drink at lunchtime any more and has also given up coffee, one of the things that first attracted her to Fratelli about almost 20 years ago on her visits from Melbourne.

"A huge lot of people I know live around here," she explains, perhaps unnecessarily. "It's a sort of gathering spot. At first, I liked it because it seemed like Melbourne. The boys, as we call them, had decent coffee, a smoother brew, less bitter, rounded and mellow. In those days, that was terribly important to me but of course coffee in Sydney has improved now. You also get creative food here, the produce and ingredients are good and they cook in a contemporary Italian style. If you have been to Rome recently, you will have seen the same sort of cooking in the old Jewish quarter." (Luckily, I have been to Rome recently so can nod in agreement.) Fratelli is small, its interior dark and dominated by a blackboard of dishes, in Italian, opposite a wallpapered feature wall. The outside tables are perfect for people-spotting. Many of the staff are Italian; regulars are greeted with handshakes. 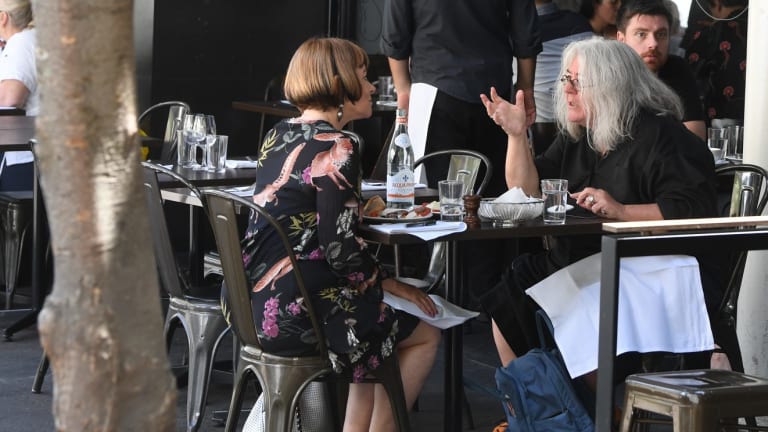 The outside tables are perfect for people-spotting.Credit:Peter Braig

Engberg's resume is extensive – most recently she was the program director for in the Danish city of Aarhus, when it was appointed one of the European Capital City of Culture in 2017. In Australia, she was the long-time artistic director of the Australian Centre for Contemporary Art on Melbourne's Southbank, the artistic director of Sydney's 2014 Biennale (a controversial year that included an artists' boycott over links between sponsors Transfield and security on Manus Island), the artistic director of the 1999 Melbourne International Biennale and the 1998 Adelaide Biennale. She has also held teaching positions at the University of Melbourne and RMIT University.

The risotto is as good as expected. I discover that Engberg, an only child, has a fascinating story. "My father was a stowaway which shows great spirit I think. He was deeply more interesting than me, in this regard." The young Eilis​, was part of an impoverished family, and sent to work with a pig farmer when he was about 10 years old. At 14, he ran away to sea. In his early 20s, at the Trocadero Dance Hall in Melbourne, "the family legend would have it that he saw my mother's ankles across the crowded room". He asked if she was Danish, she thought he said "dance". 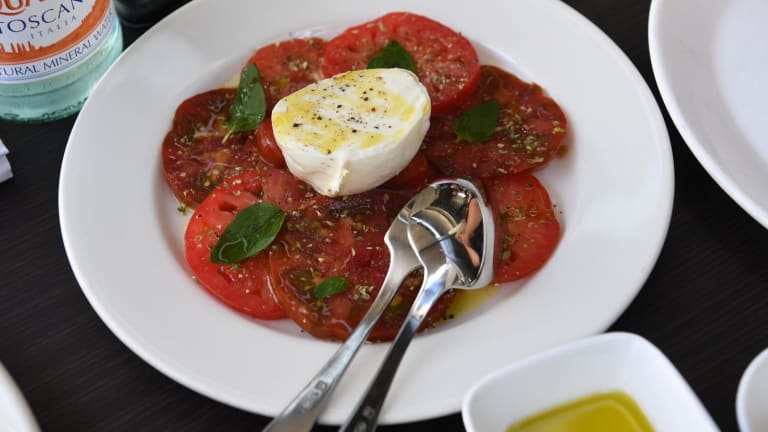 Buffalo mozarella with tomatoes: “I have to worry about colour. I am an arty person.”Credit:Peter Braig

"Off they went and boom-boom-boom!" For the rest of his life, he worked around the Melbourne wharves, often double shifts.

Her mother, Mavis, who was born in Geelong, fled to Melbourne early. "She was very urban, very stylish and she mixed with a very interesting group of people, not the least of whom were the ASIO people". She knew the Russian operatives Vladimir and Evdokia Petrov, indeed was hemming a skirt when dinner with them in 1954 – a final dinner – was cancelled. Did your mother work for ASIO or was she just well-connected? There is a long pause before Engberg answers.

I can be quite firm. I have an opinion and I also know what works …

"I think she may have been, perhaps not fully official or as a lure but close. She had some interesting jobs. One was working at the Athenaeum Club where many of the top men would go and you could hear certain things. She was a very secretive person. When I was growing up, we were the only people I knew who had an unlisted phone number."

Art entered Engberg's life through off-peak trips from the outer suburbs to see Phar Lap's remains and visit the Art Gallery. "This produced a love of art in me; I enjoyed making stories about the pictures." As a BBC television drama about an art curator spy crystallised her career path, fanned by her teachers – "in another generation, women who would have been running the country who saw something in me and encouraged me".

The University of Melbourne was "absolutely brilliant".

"I was there at the right time with great teachers. It was great fun. A vigorous creative environment." Drama and the Law Revue began to figure alongside art. "I was apparently quite good at acting." As she finished uni, she had three options – a role in Prisoner, a job as an advertising copywriter at George Patterson and an assistant curatorial role at the George Paton gallery, housed in the academic robes room at the university.

"I thought with acting that I would be typecast. I was always the Jewish mother in productions. Copywriting was fun but advertising in those days was terribly blokey so I just thought "art – that's what I have always wanted. I needed to do something that fed my intellect."

Her role as assistant director in a two-person team allowed Engberg to have a go at everything, her skills consolidated by a year in New York in the early 1980s. "People kept saying, 'why are you leaving?', but I wanted to bring the world back here. I realised that in Australia we were working at very high-level and I thought it was important to give Australian artists an opportunity to work with their peers, not just wait for a biennale to come along." A broad-ranging curatorial career has followed, locally and on the international stage.

"I was a much better curator than I was an artist. I enjoy working on the theoretical interpretation of the work, the history, the philosophy, how everything is intertwined. In the best of all worlds, you are a sort of contextual collaborator with the artist, enabling them to test ideas. If you have a robust relationship with an artist you develop a way of working together. Often being an artist can be a very lonely business; putting your stuff out there is very daunting."

The waiter returns. A very weak Earl Grey tea for her, a macchiato for me. By now it is obvious that Engberg is a decisive force. "I can be quite firm, "she admits. "I have an opinion and I also know what works and what could work and I don't put up with rubbish. I am not going to spend public money on things that are not OK. I will push quite hard so artists get the result they said they would. But I think I embolden them. A lot of time I am opening doors."

From time to time, do you run into those who take poorly to your approach? Engberg asks me to repeat the question. "I don't work with them again," she says. "You have to work in a respectful way, most of the time people are very grateful. I explore the idea if they seek my view.

"The really intelligent artists know what they are doing and I so admire them. They understand how their work fits in with our culture and also with an audience. In the curatorial area, I love mentoring, I think it so important."

Working in Aarhus, the port city from which her father stowed away, heightened Engberg's connection to Denmark. Living, with her partner of 20 years, Kay Campbell, in eight Airbnbs over the sojourn she welcomed the scale of the small city, its walkability, sustainability, the Danish simplicity of life. "They are not austere but they are simple. If they have a chair, they value that chair, they don't have thousands of televisions." Back in Melbourne, where they have let out their own house "south of the river" until 2020, the pair are contemplating a return to the more walkable north, with a stroll to the baths for a daily swim. "Come to Venice," she says, as we part, with the prospect of a risotto at Trattoria Madonna.