Not many artists have been personally invited by the chief of a South American tribe to make a virtual reality film in the Amazonian jungle. None, in fact, until Lynette Wallworth received such a summons. It came about when Tashka, chief of the Yawanawa​ tribe, saw Wallworth's previous VR piece, Collisions (2016), at the Sundance Festival in Utah.

Collisions, which tells the story of the atomic bomb detonated at Maralinga from the perspective of the indigenous people of the region, took the medium of VR into new territory. Whereas most VR pieces are content with the small frisson of putting the viewer into an imaginary three-dimensional space, Collisions veered back and forth through time. We travelled from the contemporary setting of an outback homestead to an animated reconstruction of the atomic blast and its aftermath. 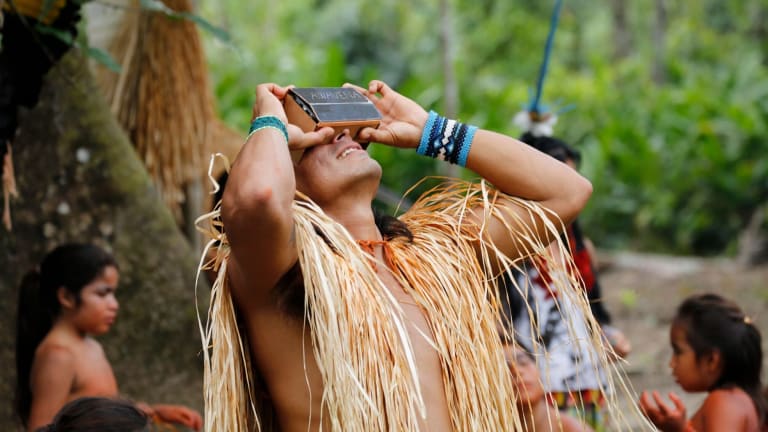 Lynette Wallworth and her team had to lug many kilos of high-tech equipment up the Amazon by canoe to make the virtual reality film Awavena.

The film combined the most intimate realism with a powerful leap of the imagination, to be experienced intellectually and viscerally. It also advanced the formidable reputation Wallworth, who was born in Bexley, has been forging around the world over the past decade. She won an Emmy for Collisions in 2017, and has shown her work at Sundance and the Davos World Economic Forum. In the international arena, Wallworth is one of Australia's leading artists, but at home we've been slow to catch on.

Awavena, viewable at Carriageworks only until December 9, is her most ambitious piece to date. It consists of two separate VR sequences beginning with a 17-minute journey into the Amazonian jungle, where we meet Hushahu, a woman who wants to become a Shaman, a role traditionally reserved for men. Her mentor is Tata, a respected Shaman who has reached the age of 100. If the Yawanawa are to have a future, Tata feels it's time to draw on the energy of women. 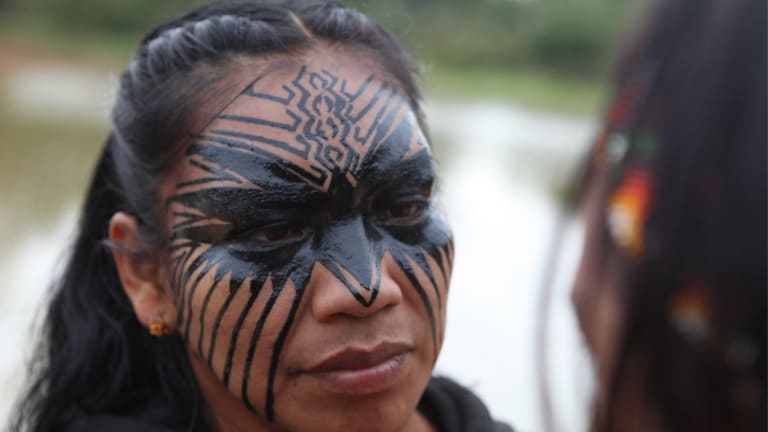 Awavena consists of two separate VR sequences beginning with a 17-minute journey into the Amazonian jungle.

We go with Hushahu into a remote part of the forest, where she will undergo the long, solitary initiation rites that allow her to enter the fold. It's a physical and mental ordeal, abetted by the drugs and medicines that facilitate contact with the spirits. We join with Hushahu in seeing trees and plants ablaze with light and colour.

In a second sequence of six minutes we are immersed more completely in the Shamanic experience: surrounded by tiny points of light gathered into virtual constellations that can be scattered by simply blowing on them. If that sounds cosmic, descriptions don't do it justice. According to the Yawanawa it's a close reconstruction of the way the Shaman sees the world – not as mere surfaces, but as a dense, crackling field of energy, as if the very atoms have been laid bare. It's an altered state beyond the imaginings of Hollywood.

The CGI sequences in superhero films are intended to overwhelm us, inducing a feeling of awe. More often than not the only feeling they generate is one of boredom, as the same old apocalypses are rehearsed from one movie to the next.

Wallworth's Shamanistic visions come from the opposite direction. What we are seeing is not a fantasy but a portrait of the forest that is more real than our conventional version of reality. It makes us aware of ourselves as but one small component in a universal life force. 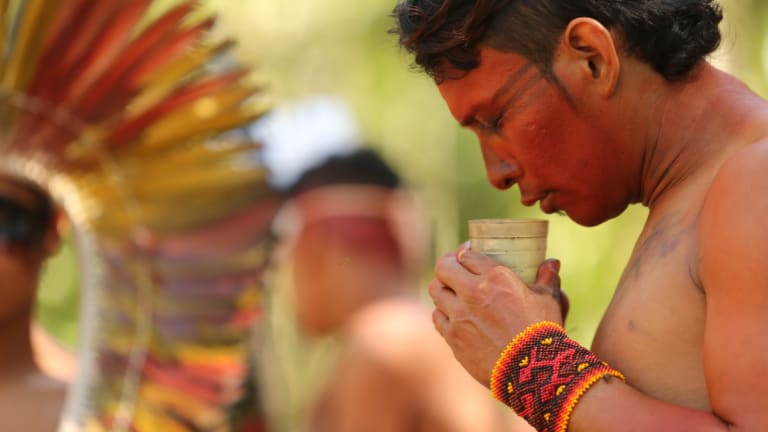 The film makes us aware of ourselves as but one small component in a universal life force.

Mircea Eliade, the historian of religion who wrote the best-known book on Shamanism, defines it as a "technique of ecstasy" – a word that denotes an extremity of happiness in which reason gives way to emotion. The Oxford English Dictionary provides a secondary definition: "An emotional or religious frenzy or trance-like state, originally one involving an experience of mystic self-transcendence."

Eliade points out that every Shaman might be called a magician, but not every magician is a Shaman. Neither is the Shamanic ecstasy the same as that experienced by St Teresa in Bernini's famous sculpture, in which religious passion is portrayed as a kind of orgasm. The ecstasy of the Shaman lies in a close communion with nature and the spirits, an ability to act as a conduit between this world and the unseen dimensions that surround us. The Shaman is a doctor that heals the soul rather than the body, with physical health being a corollary of spiritual health.

This idea has held an enormous appeal for artists. In Germany, Joseph Beuys played the role of Shaman, aiming to heal the fractured soul of his nation. The Chinese artist, Cang Xin, draws on traditional Shamanistic beliefs, as does Almagul Menlibayeva of Kazakhstan. There are Shamanistic echoes in the work of figures such as Marina Abramovic and Matthew Barney.

Lynette Wallworth is less of a mystic than any of these. Her attraction to Hushahu's story, which led her and her team to lug many kilos of high-tech equipment up the Amazon by canoe, is predicated on several levels. First there is the holistic vision of human beings at one with nature that is fundamental to Shamanism. Having brought ourselves to the brink of destruction by our need to master the natural world it may be time to stop chopping down forests and burning fossil fuels.

What we are seeing is not a fantasy but a portrait of the forest that is more real than our conventional version of reality.

She's also strongly committed to the rights of indigenous people to maintain their traditional ways of life. In the Amazon, tribal communities have been devastated by colonial profiteering, and then more insidiously by Christian missionaries. If anyone believes in these characters as a force for good, they should read Norman Lewis' damning study, The Missionaries: God Against the Indians (1989).

Finally there is the feminist aspect of Awavena, which shows a woman assuming a role that has been exclusively male from time immemorial. One of the miracles of this project is that the political issues are so skilfully integrated within the body of the work. We may be adrift in the spirit world for much of the time but we are never allowed to lose touch with reality.

For technical and scientific expertise Wallworth has relied on specialists such as cinematographer, Greg Downing, and biologist, Anya Salih. Her own contribution has been to tie these strands together with an overarching creative vision that fully explores the possibilities of the medium. Most VR projects are no more than wraparound movies, but Awavena would be much diminished if it were created by any other method. If all new technology has to transcend a phase of mere novelty, and all truly great art represents an ideal marriage between form and content, it's clear that Wallworth has produced one of the first VR masterpieces.