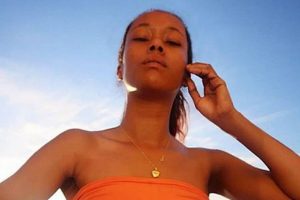 Married At First Sight UKstar Whitney Hughes has been caught up in plenty of drama in recent episodes of the E4 experimental dating show.

Whitney, 33, was at the centre of a wife swap mayhem that saw herspend the night with Matt Murray while they were both still technically with their partners , Duka Cav and Gemma Rose.

The drama came to a head last week on the show, but life for the legal PA when she isn’t on the E4 show looks very different as she lives it up in her cosy home while enjoying her time off in the most luxurious ways possible.

Whitney is no stranger to showing off in a string of bikinis and is proud of her incredible figure if her Instagram account is anything to go by.

The brunette beauty is often pictured living it up on the beaches of Dubai, Jamaica and the Caribbean in her two pieces.

However when told she had an incredible figure, Whitney joked that the secret to her looking so great in a dress was simple.

Alongside an image of herself in a leather dress she wrote: “To the cute boy who kept complimenting my figure all night. I was wearing spanx.”

Whitney hails from St Albans, in Hertfordshire, and often gives her 34,1000 fans a peek into the place she calls home.

As would be expected, her abode is expertly decorated with sleek white walls and gold accents.

To make sure she captures her best angle, Whitney has a massive mirror in her bedroom which is surrounded by an array of different flowers.

While Whitney seems relaxed in her own surroundings, her time on Married At First Sight has been full of many uncomfortable moments for viewers.

Last week, the show’s expertsdecided to grant Whitney and Matt permission to remain on the show, as they revealed they were a “match on paper”.

Mel, Paul and Charlene weren't best pleased with the duo's explanations and Paul told them both that they had "broke the code" before saying that he could not "endorse" them going back into the experiment as a new couple.

However, he then said he could tell Whitney is really into Matt and had noticed a change in her behaviour, with Mel revealing that the experts had checked out the "science" which showed the couple to be a good match on paper.

The three experts then announced that they are willing to let them back into the experiment as a new couple, but they will be 'dating' rather than married in the experiment.