MAIL ON SUNDAY COMMENT: Real Britain has spoken. Now Boris Johnson must seize his chance to be a truly great Prime Minister

The real Britain has just powerfully reminded us all of its existence.

This is not the internet obsessed, twittering, fanciful Britain imagined by the vain, secluded elites of London.

This is the Britain of normal people living in normal places and dealing with all the hard-edged problems of real life, clear-thinking and unsentimentally patriotic.

It is the real Britain which delivered a Tory majority of 80 and ended for good the political career of Jeremy Corbyn. 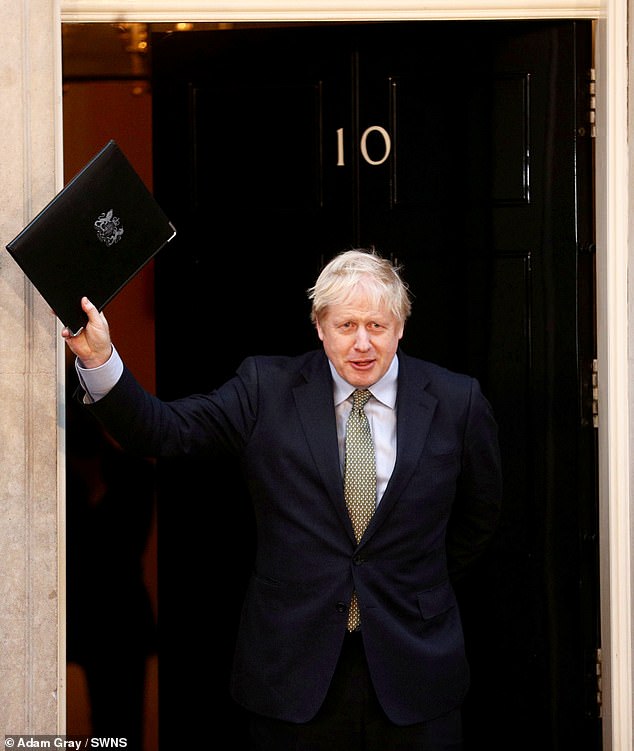 Real Britain: Voters living in normal parts of the UK  delivered the Tory majority of 80 seats

It feels pain when taxes and prices rise, is besieged by the growing problems of a mismanaged State, from rising crime and disorder to potholed roads and inferior public services.

In that real country, actions have consequences and people have duties.

A promise is a promise and we are responsible for our own actions.

The real Britain was and is sick and tired of a political class which, given the simple task of taking this country out of the EU, invented every possible obstacle and dithered itself into a stupor of vanity and self-will rather than simply doing its duty.

The real Britain sees through the froth and nonsense which the BBC and others pump into their homes on TV, radio and social media.

It is tired of poseurs such as the actor Hugh Grant and the comedian Steve Coogan who assume that a little screen celebrity gives them the knowledge, the power and the right to preach politics from on high to the masses.

It is weary of politicians elected as Conservatives, such as Dominic Grieve, Anna Soubry, Philip Hammond and John Bercow, who imagined that their anti-Brexit views were shared by a majority. Now they know otherwise.

The real Britain can smell a fake and makes its own mind up – in ways which often do not suit the elite.

On Thursday, it made its mind up that Boris Johnson must stay in Downing Street and that Jeremy Corbyn’s Labour Party needed to be taught no end of a lesson. 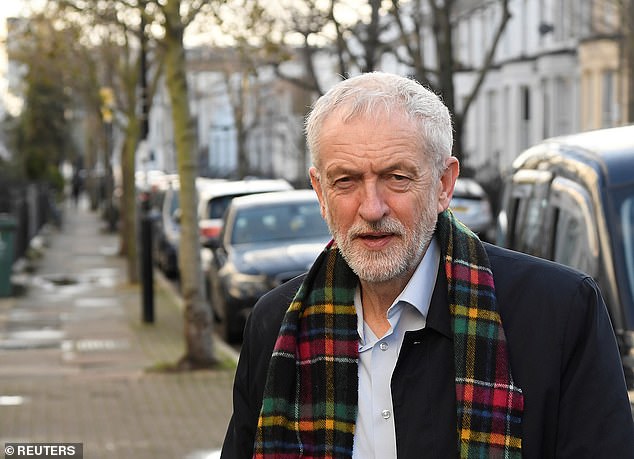 Career over: Jeremy Corbyn’s  resounding defeat  at the polls led him to step  down as  leader

The real Britain was actually insulted by being asked to accept as Prime Minister a man who in every conceivable way was not fit for the task.

What did the Labour Party think they were doing when they seriously proposed that Jeremy Corbyn should move into Downing Street, sit at the head of the Cabinet table, represent the UK abroad and control our nuclear deterrent?

Even to suggest such a thing was to slap its own supporters in the face.

You do not have to be a Tory to think that this was absurd and contemptuous.

Plenty of Labour supporters actively preferred to vote Conservative for the first time in their lives, because they rightly felt that Mr Corbyn was literally insupportable, and they did not think that party loyalty required them to put a terrorist sympathiser and someone feeble over antisemitism into office.

But the Corbyn-supporting, Boris-hating metropolitans had no idea this was even going on. They continued to fantasise that they could defeat the Tories and prevent Brexit.

In the case of the Liberal Democrats, they even persuaded themselves that they could sweep the country, a delusion that even they could not maintain for long.

Our lofty elite get things so wrong because they are clueless about what this country is like outside a few prosperous London postal districts.

And they were allowed to maintain this mass delusion for weeks on end, partly thanks to the absurd distorting mirror of the BBC, once a famed and trusted national broadcaster, now increasingly the megaphone of the liberal elite.

The Corporation’s reporting of political events reliably followed the agenda of the Left.

In general, once the referendum was over and it was no longer bound by strict broadcasting rules, it repeatedly gave generous coverage to those opposed to Brexit.

During the Election, it was outdone only by Channel Four News in its tendency to report events in a way that damaged the Government, most noticeably in the huge prominence given, in the final hours of the Election, to the case of the boy pictured lying on the floor of a hospital A&E department.

The BBC has ignored repeated complaints about its instinctive bias. Like the rest of the Left-liberal upper deck, it has now become the victim of its own prejudice and its own closed mind. It could not see that it had gone too far.

And if it now faces – as it should – a review of the licence fee, it has only itself to blame.

Even its most resolute defenders find it harder and harder to make a case for its extraordinary power to compel citizens to pay its bills or face fines and even prison.

In the age of streaming services, this outdated monopoly is in any case increasingly difficult to enforce.

Reform of the BBC is just one of the tasks that Boris Johnson’s newly empowered Government can now be expected to tackle.

First of all, of course, comes the achievement of Brexit itself.

Then the NHS, law and order, social care and the need to spread the nation’s wealth into areas which Labour used to call its own but which have now sensibly decided to give the Conservatives a chance to show what they can do.

This result really is one man’s personal triumph. Boris Johnson, by sheer force of personality, has done things that no other politician could do.

He has both the intellectual force and the self-confidence that are so often lacking among modern MPs, and an ability to speak directly to the people without condescension and without pretending to be somebody he is not.

He now needs to resolve to be a truly great Prime Minister.

His majority frees the Tory Party to do some proper creative thinking for the first time since the early Thatcher years of the 1980s. So many of our problems, from defence to housing and health to education, need the application of a fresh mind.

And the real threats to the Union also require deft handling. The SNP’s Nicola Sturgeon is greatly overstating her party’s supposed triumph north of the border.

But in truth, there is still no majority for Scottish secession from the UK. Even so, that does not mean that the UK Government can afford to be complacent or tactless.

The best way to keep Scotland in the Union is by generosity, consideration and consent.

But in the end, the prospect for Boris Johnson is surprisingly sunny, after all these years of storms and squalls.

He has an undeniable mandate. He has the ear of the country. His opponents, inside and outside his party, are scattered and divided. And the country – especially the real, hard-working, unpretentious, patriotic part of it – is ready to give him a chance.

He should seize that chance. And the rest of us should help him take it. We have spent too long becalmed and bemused by Brexit. It is time we set a firm course for the future.

END_OF_DOCUMENT_TOKEN_TO_BE_REPLACED

END_OF_DOCUMENT_TOKEN_TO_BE_REPLACED
We and our partners use cookies on this site to improve our service, perform analytics, personalize advertising, measure advertising performance, and remember website preferences.Ok