My grandmother showed love in many ways. She’d slip you some money when no one was looking, or crack up telling you a joke that never seemed to translate properly from Italian to English. But her favorite way, by far, was cooking for you. Specifically, cooking you arancini, or what she called "rice balls."

If you’ve never had arancini, imagine if risotto and a meatball had a glorious, deep-fried baby. Filled with rice, cheese, and, in some recipes, meat and peas, then coated with breadcrumbs, these bites of heaven spoiled every meal I’ve ever eaten at my Nonna’s house. She always seemed to have them ready for me, even if she wasn’t expecting me to come over. If ever I had a problem, Nonna would shush me with, "non ti preoccupare — I make rice balls." Rice balls were her love language.

"Kristin," she’d tell me, "when you get older, you make these like me." I never doubted that fact, but at the same time, I never thought to ask her how she made them. My mother didn’t have as strong a connection with the dish as I did, so she didn’t know how to make it. But I knew I’d learn one day. As long as Nonna had her kitchen in Brooklyn, she’d be making rice balls. I had plenty of time. 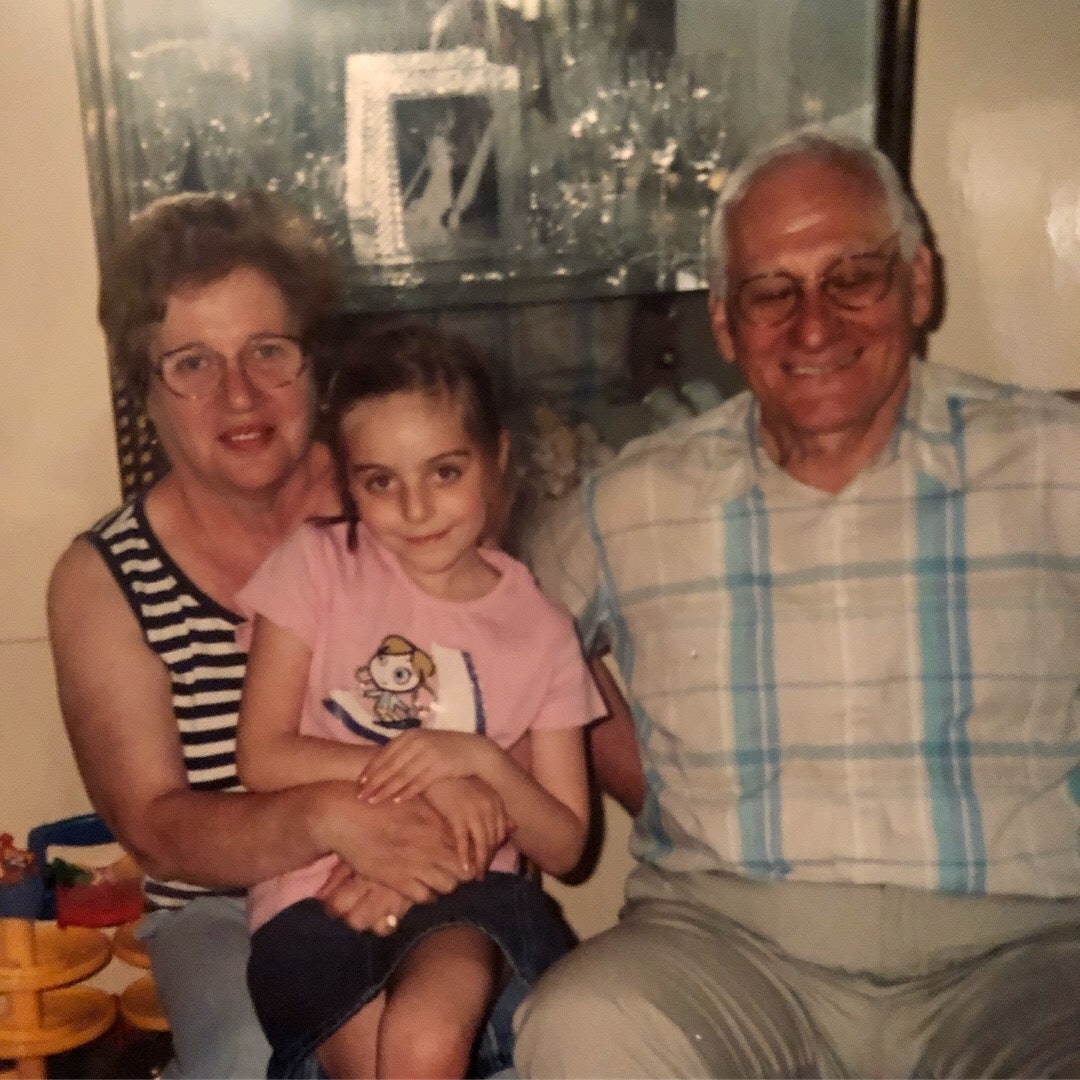 Then, during my second year of college, Nonna was diagnosed with dementia. It started as minor forgetfulness, but soon evolved into asking the same question repeatedly, often moments apart. We knew Nonna wasn’t OK the moment she stopped making her rice balls. I decided to learn some Italian, after I noticed she was speaking less and less English. And yet, I never thought to ask her how she made her rice balls.

The most difficult thing about having a loved one with dementia is that they are still there physically. It’s like a shell of the person you knew remains, while everything you love about them has been scooped out. What’s left is confusion, frustration, and the guarantee that things will only get worse. She hasn’t cooked in years, and I’m not sure she remembers how to.

So, at 25, I’ve decided to continue on the tradition. Though I didn’t have her recipe, I had a recipe from the internet, and my memories of how Nonna’s rice balls are supposed to taste. I felt determined to make something damned delicious — and I hoped that by trying to cook her staple dish myself, I’d find a bit of her that had felt lost to me for a while.

To make the rice balls, I recruited my boyfriend and headed to a local Italian market near my apartment. If we were going to do this, we were going to do it the way she would have — using ingredients that were fresh, imported, and a touch more expensive, because quality. With some arborio rice, Italian breadcrumbs, and fresh mozzarella in hand, I prepared my kitchen for the biggest cooking marathon I’ve had to date. 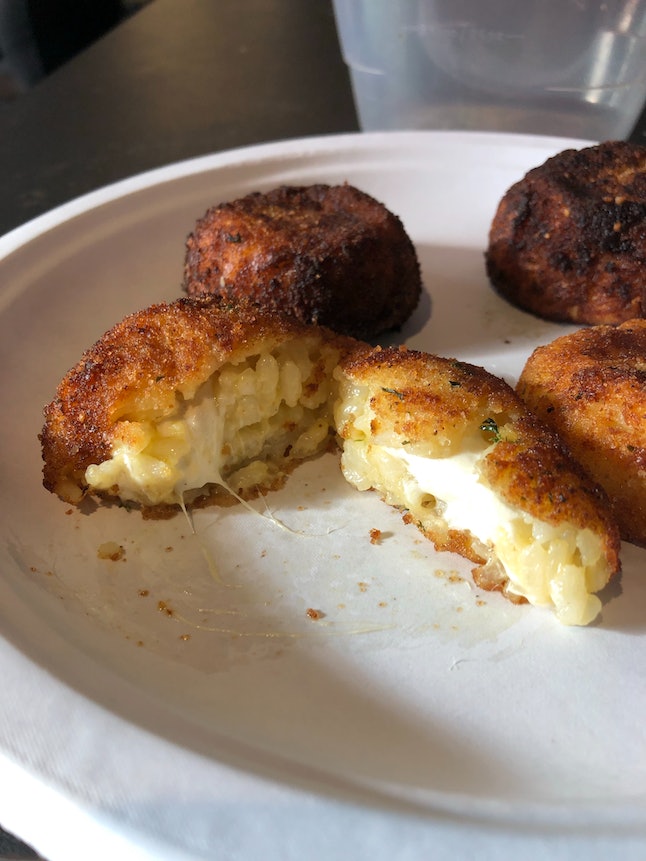 Recreating Nonna’s signature dish proved a lot more difficult than she ever let on. While it always seemed to me like rice balls materialized for my Nonna by the will of Sicilian angels, I was at it for nearly four hours trying to figure it all out. The first part was the trickiest — how did she cook the rice? I knew she never included meat or peas, but the rice she used always seemed to be yellow, while the rice I bought was white. After mulling it over, I decided to improvise. Part of this recipe would need to be mine, because at this point, she really couldn’t help me. That fact sat heavy in my chest, even as I fought to find a happier memory of her.

I started off by making a basic risotto. By adding chicken stock to rice, stirring, and repeating, I had a pretty decent base for my rice balls. Once I added the parmesan cheese, a bit of extra butter, and some parsley, it took all my self-restraint not to eat the pot by itself. 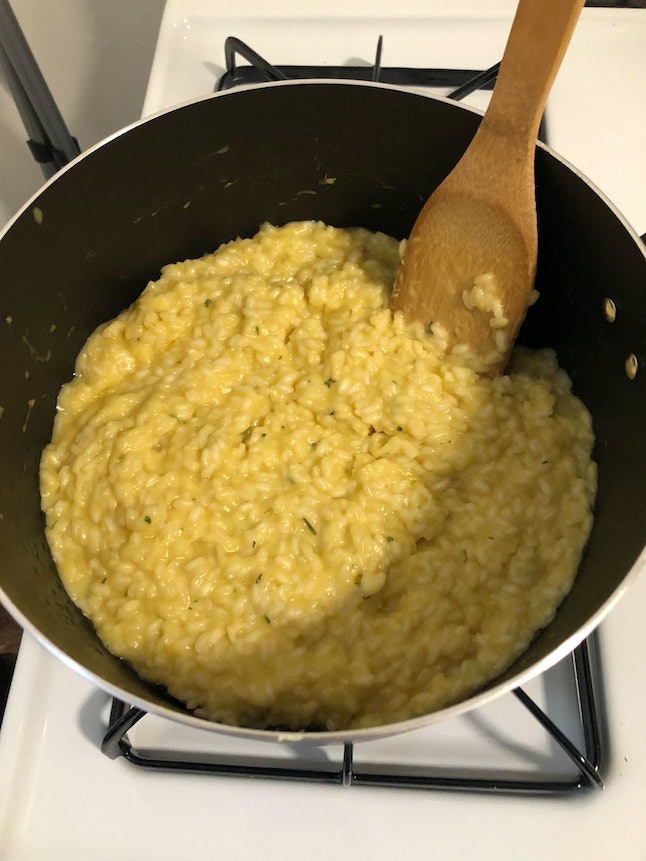 I took a minute to admire our handiwork before spreading the risotto on a baking sheet to let it cool. Before I could understand what was happening, I started to get emotional. My Nonno, who passed away a year before, loved making risotto. He cooked a lot before I was born, and I never really got to try any of it.

I took a second to let the feeling pass, but it still brought tears to my eyes. No matter how hard I tried, I couldn’t let go of the pocket of regret that resided in my chest. Why did I wait this long to cook like they always wanted me to do? Why didn’t I talk to my Nonna about her cooking sooner?

Wiping away my tears, I got back to the task at hand. After the risotto was spread on a cookie sheet, I let it cool for an hour. Then I chopped the fresh mozzarella into cubes, and formed balls around them with the chilled risotto. I popped them back into the fridge once more so they wouldn’t come apart in the frying pan. 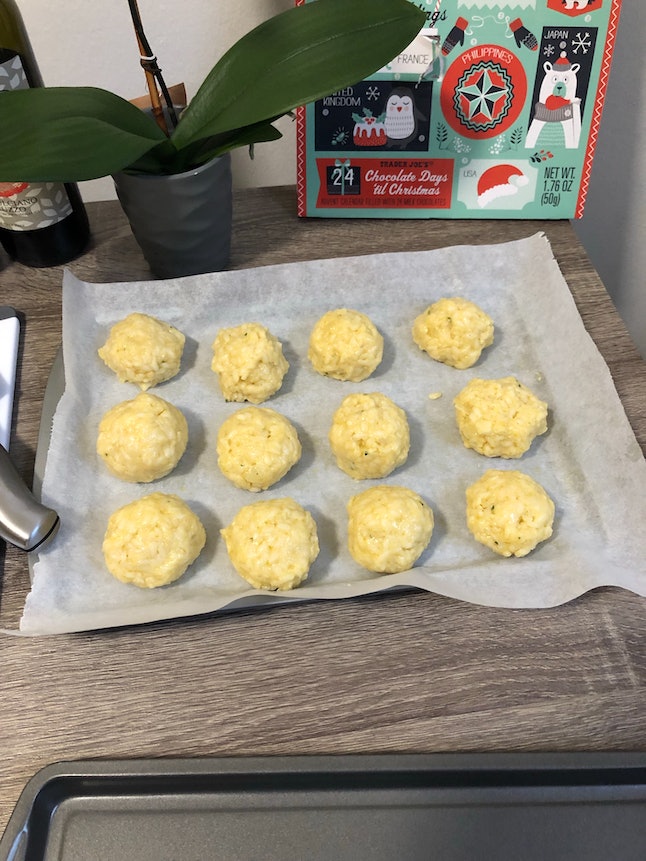 Finally, after another hour, it was time to start frying. After dipping each ball in flour, egg, and Italian breadcrumbs, I heated up the oil, and had truly no idea what I was doing. How much oil would Nonna put in the pan, and how long would she cook them for? Did she even put the mozzarella in the middle, or did she grade it throughout?

I dropped one rice ball in the pan, in what I thought was enough oil, but it cooked too quickly, while the sides remained blond. When I cut in the middle, the cheese wasn’t melted. Adding more oil to the pan, I tried again. This time the rice ball was fully cooked on the outside, but it still wasn’t getting hot enough in the middle.

What was I doing wrong?

For my last batch, I turned down the oil, and they cooked more slowly, and evenly. Finally, I had something resembling what my Nonna used to make, and I felt pretty darn good about it. Exhausted, but good. And they tasted incredible — not quite the same as Nonna used to make, but close to her staple, with a modern spin. If she ever did try it, I know she’d have a million criticisms of what I’d done wrong. But somewhere in there, she’d be proud too. 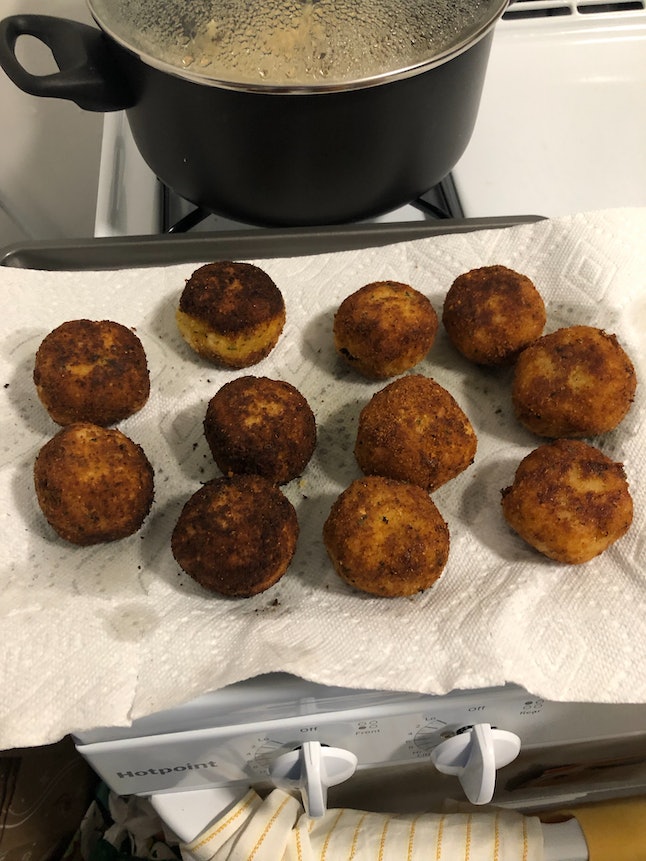 For the next week, I ate my leftovers, to keep the strength of my memories alive just a little bit longer. What struck me most about this experiment wasn’t the sadness it brought up in me, but the longing I started to feel. I wished I could know my grandparents as they were way back then, the same age I am now. Twenty-five-year-old me is, in a lot of ways, their mirror. The Italian roots dug deep within me, and the love of food that permeates every aspect of my identity, exist largely thanks to them. As an adult, I’m finally beginning to look at food through the same lens that they did — as a way to show love, a means to enjoy life, and the people around you. But I can’t share that with them.

While I’ll likely never know exactly how my grandmother made her famous dish, I can at least find solace in the fact that a piece of her found its way into me. And it’ll be there whenever I cook.