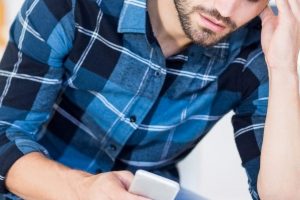 A man has been dubbed a child after faking an injury so he could leave a wedding early, and force his partner to go home too.

The story was shared anonymously on the Reddit forum ‘Am I The A**hole?’ (AITA) asking the public to weigh in on the situation.

And unsurprisingly, the public labelled the man the a**hole.

The partner began the post by explaining her husband had been sick for a few days ahead of the event.

She added she had been taking care of him at all hours of the day but he was on medication and fine to walk to and from the restroom and kitchen.

When she said she was going to the wedding as planned, her husband threw a fit and kicked off that he ‘couldn’t be left alone’ while he was sick.

However, she hit back at him pointing out he wasn’t so sick he couldn’t manage for a night.

The wife even offered to get her sister-in-law to come over and watch him if he was that worried about being alone but he demanded she stays home with him.

She refused and went to her brother's wedding but while attending the big day her husband text her claiming he had fallen down the stairs and hurt himself.

The post continued: "At the wedding, I got a text from him saying he lost balance and fell off the stairs and hurt his back. He said he was in a lot of pain he threw up and couldn't move, and insisted I get home asap.

“I freaked out and started calling his phone but he didn't answer. I thought 'he must've passed out' and I freaked out even more. I got in my car and drove back to our house immediately.

“When I got home, I rushed towards the stairs while calling out his name but he wasn't there. I started to really freak out.

"I rushed into the bedroom and found him in bed drinking juice and soon as he saw me he put the phone down.

“I instantly knew he lied so I lost it on him and started yelling saying he freaked me out and caused me to miss my brother's wedding for nothing… absolutely nothing.

“He said that he already told me I couldn't leave him alone in the house and that this 'very scenario' could've happened if I stayed there any longer. I yelled at him calling him horrible which made him cry. He started crying and throwing his juice all over the place."

But when she called her sister-in-law, the man's sister yelled at her for daring to leave her husband home alone when he was sick. Adding that she also shouldn’t have told him off.

However, not many others were on the husband's side, with the forum overwhelmingly dubbing him the a**hole in this situation.

Many called for her to ask for a divorce, and endless more insulted the man, going as far as to brand him a ‘child’ for his actions.