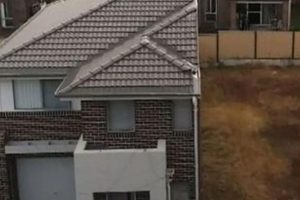 A fuming bloke claims he “nearly fainted” after he realised that builders had only built his family “half a house”.

He said that he was not informed about the design by the construction company.

Three years after he employed the company to contrast his custom off-plan home he was outraged to find that his free-standing detached home had been built as a semi-detached.

Additionally, there was no second home joined to the wall, reports the Independent.

The odd building featured on the TV show A Current Affair which showed it is flat on one side and windowless – meaning it looks like half of a semi-style house.

Mr Aryal told the programme he “nearly fainted” when he first laid eyes on the house.

And adds he was “not given any notice” of changes to the home design plans – which the company he used disagrees about.

In a legal letter to A Current Affair, the builders say Mr Aryal was made aware of the change and was given multiple opportunities to pull out.

The business said that the construction began as a detached home, but had to be altered to comply with Liverpool Council regulations that reportedly state the block had to be an attached dwelling.

An unhappy Mr Aryal said that, while English is not his first language, he definitely didn’t agree to the change.

He said: “It’s not a free-standing house, it’s not a duplex, it’s half a house. And it looks embarrassing. We wait three long years.”

Mr Aryal also said that he was told construction would only take one year.

And, he was forced to move into the home during the pandemic as his wife fell pregnant and he didn’t want to lose any work.

He said: “We were in a really harsh situation and we needed to find a place to live because we didn’t have a place.”

But, they do not have an occupation certificate, which verifies that either the council or a private certifier is satisfied that the building is suitable to occupy or satisfies requirements in Australia’s property code.

The company claims it has been seeking the certificate for nine months, but the council want to know that the other half of the semi will be built and completed.

“Even though this situation hasn’t been caused by us, we are doing what we can to ensure that the right thing is done by Mr Aryal and his family.”