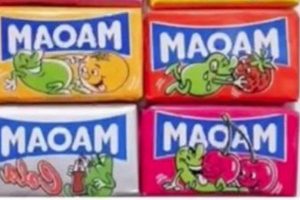 A man has been accused of "ruining" people’s childhoods after pointing out some rather racy-looking pictures on Maoam sweet wrappers.

The classic fruity chews by Haribo were a sweet and inexpensive treat in many people’s formative years – but they didn’t take a close look at the design.

In a video, TikTok user @Mitchxllt questioned: 'Why have we never realised what Maoams are actually doing?'

He then shows a close look at six different flavours of the sweets and their packaging, which could be seen to be a little suggestive.

A green lime cartoon character is seen in a variety of odd poses with some fruit, such as fondling a lemon while licking his lips, being tickled by a raspberry and slobbering all over a strawberry.

The TikTok user added in the caption: "You learn something new everyday."

Unsurprisingly, the video has been watched nearly 3 million times and caused a storm of comments as shocked sweet lovers said they’d never noticed the cheeky details.

One viewer said: "I – my childhood was a lie", and a second wrote: "I'm never gonna think of Maoams the same again."

"I guess they have children to make a combined flavour?" said someone else trying to find a practical reason for the colourful designs.

Another joked: "Thank you for ruining my childhood bro."

This is not the first time the fruity packaging has been brought to people’s attention, however.

Simon Simpkins, from Pontefract, West Yorkshire, complained to a shopkeeper in 2009 over the "lurid" pictures, Mail Online reported at the time.

He told the title: "The lemon and lime are locked in what appears to be a carnal encounter.

"The lime, whom I assume to be the gentleman in this coupling, has a particularly lurid expression on his face."

He said he argued with the shopkeeper who sold the sweets and his wife became "distressed" and had to sit down.

At the time, a spokesman for Haribo told the title the packaging was "fun" and "very popular with fans, both young and old".