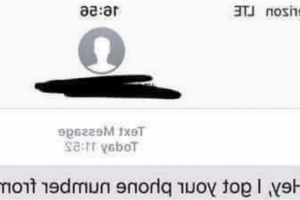 A woman has been left in total shock after a man text her after getting her number in a very creepy way.

She had recently taken her dog out for a walk when a complete stranger stopped to stroke the pet.

Unknown to her, when he patted the dog, he also took the time to memorise her phone number which was written on the dog’s collar.

The anonymous woman then posted a screenshot of the text she was later sent by the "creepy" man only hours after first meeting him.

It read: "Hey, I got your phone number from your dog’s collar. Thanks for letting me pet her. We should hang out."

As unnerving as the first message was, it didn't end there, as he sent another two messages hours later.

“Why do you even have a number on her collar if you don’t want people to text you? What the f**k? Such a tease.”

Obviously the woman included her number on the dog's collar in case the pet ever went missing so someone could contact her if they found the pet.

Since the incident took place the messages have been posted on Reddit where people have been left both shocked and confused.

“That is next level creep,” one person commented.

Another added: “If you’re getting bad vibes or they’re looking at your dog’s collar for a bit too long, you need to leave.”

Meanwhile one more person said: “Oh I don’t like this."

And another confessed: "This same thing happened to me once. It was so friggin weird!

"The guy made small talk about my dog, because he is the cutest pup ever then asked to take a picture. A few days later he sends me a text like this."

For more lifestyle stories, sign up to the free Hot Topics newsletter here.