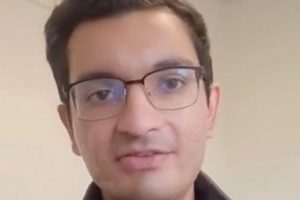 A man had his life "saved" by the TikTok community after he made a video and sharp-eyed viewers noticed something wrong with his neck.

In a clip uploaded by NHS surgeon Dr Karan Rajan @dr.karanr, he explains that the man in question had thyroid cancer and probably hadn't noticed the slowly-growing lump on the front of his neck.

He shared the video of the TikToker @seattletechbro, who was posting about finance when he became inundated with concerned questions about the lump.

After people begged him to get a doctor to examine his neck, Dr Karan said the TikToker was "scared" and heeded their advice, getting an "ultrasound and some more tests". Dr Karan continued: "It turned out this swelling was thyroid cancer! He had surgery to remove the enlarged nodule and this is him after surgery."

He then shared a clip of the TikToker with a bandage where the swelling in his thyroid was previously and it looks like he was healing well.

The doctor added in the comments: "Who remembers the time when people spotted a melanoma in a person's TikTok video… amazing stuff!"

Since it was uploaded on Sunday, August 22, the video has been watched more than half a million times and hundreds of people left comments. "Lol hypochondriacs can be the best diagnosticians," someone joked.

"For the love of Tiktok. Bravo people," commented a second user.

A third viewer wrote: "At least the TikTok community is useful sometimes."

Someone else shared: "My aunt had thyroid cancer and survived."

According to the NHS, thyroid cancer is rare and most common in people aged in their 30s and those over the age of 60.

Symptoms of thyroid cancer include a painless lump on the front of the neck, unexplained hoarseness, a sore throat that does not get better, and difficulty swallowing.