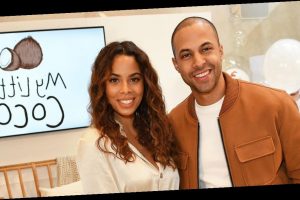 After months of disagreements with neighbours over planning permission, Marvin and Rochelle Humes have finally finalised their plans to add a swimming pool to their home.

The couple have been fighting for approval for months to build a pool and hot tub area in the garden of their £3.3 million mansion in North London, according to reports.

Their neighbour initially disagreed with the pair’s plans on the basis an outdoor pool would be too noisy for the North London area.

The neighbour, whose home backs on to the couple’s property, wrote a letter to the council concerned that the noise from the pool’s plant room would be too disruptive, MailOnline reports.

He wrote: “We do not want to have potential noise pollution from the continual hum day and night of the pool machinery in our very quiet and peaceful garden.

“We have lived in our house for 28 years and it would be a shame to have our garden spoilt by this. The noise would not affect [them] as it is a distance from the house but it would impact on us.”

However, despite the neighbour’s pleas, Barnet council have given the project the green light and the plans will go ahead.

The permission was given under the condition that noise from the plant room is five decibels less than background noise a metre from any of the neighbour's windows.

However, in a separate application, the couple were refused planning permission for entrance gates after they were deemed a "dominant and incongruous addition", and out of keeping with the area.

Marvin, 35, and Rochelle, 31, moved to the London pad earlier this year after relocating from Essex to be closer to where they do most of their work.

They live in the sprawling pad with their three children; daughters Alaia, seven, and Valentina, three, and baby son Blake, 11 weeks

The home boasts nine bedrooms, his and hers dressing rooms and even an internal lift to go between floors.

Fans are invited to take a look around the impressive space via the couple’s dedicated home Instagram account.

The home features an incredibly designed play room for the children which includes a stage space where they can imitate their famous popstar parents – the perfect space for stars in the making.