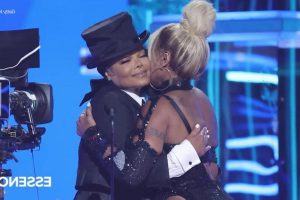 Mary J. Blige has long been recognized among Black women as an icon. Now, she has the formal distinction from the Billboard Music Awards as well.Blige was honored with the Icon Award at the 2022 Billboard Music Awards on Sunday evening, hosted by Sean “Love” Combs. The host and CEO of Bad Boy ushered Blige to the stage after a montage video featuring appearances from Gabrielle Union, Taraji P. Henson, and Queen Latifah giving the songstress verbal flowers.“She sings me, she sings you,” Jackson said of Blige as she prepared to hand over the icon trophy. “Mary has made a commitment to her fans to always be her authentic self.”