Mass. Bus Driver Inspired by His Students Graduates from College with Hopes of Becoming Teacher 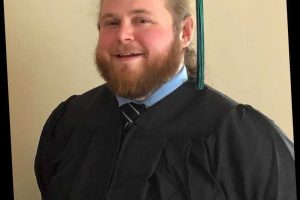 A Massachusetts school bus driver is heading back to college to become a high school history teacher — and he says it’s all thanks to his supportive students.

Clayton Ward is a self-proclaimed history buff, and as such, enjoyed the time he’d spend chatting with his students about their history classes as he bussed them to and from school in Framingham.

“After several of these discussions, some of the students would tell me they wanted me to be their teacher,” he said in a release from MassBay Community College. “That small mention from those kids… it stuck with me and gave me the motivation to complete a goal I had started years ago.”

Ward, 30, told CNN the students appreciated that he brought a “different view” to the table, something they could set apart from their repetitive lessons.

With that in mind, Ward enrolled at MassBay Community College in May 2019 with the goal of transferring to a four-year university and eventually having a classroom of his own as a high school history teacher.

Ward initially attended college in Virginia after his high school graduation, but left after a few semesters and soon started driving buses — something both his parents and grandfather also did, according to CNN.

But he still valued education, and talking with his students on the bus route “renewed his sense of passion for expanding and teaching young minds,” the MassBay release said.

Ward completed his associate’s degree in liberal arts this spring, and managed to take his classes full time while also still driving his bus full time.

“It wasn’t always easy. I would drive my route in the morning and afternoon, take a class in between shifts, and take night classes and classes online to complete my degree requirements,” he told his college. “I would think of those students and all the years I wanted to make this happen, and it helped me focus my energy.”

He completed his degree with flying colors — including a 4.0 GPA — and earned a spot on the Dean’s List and membership to the Phi Theta Kappa National Honor Society, his school said. He also earned the All-College Award for his perfect GPA, and the All-Divisional Award for having the highest GPA in the humanities and social sciences division, as well as the entire liberal arts program.

He plans to pursue his bachelor’s degree in history with a minor in secondary education at Framingham State University in the fall.

“You wouldn’t think that kids can do something like that, to make such a large impression and give me the drive and ambition that I need to make the decision to go back to school,” Ward told CNN. “It’s kind of crazy that such a small thing can make such an impact on your life and I just want to thank them for every little bit of it.”