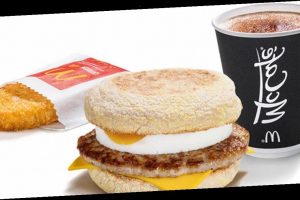 McDonald's fans have been left fuming after its app crashed meaning they missed out on free McMuffins.

Customers slammed the fast food giant on Twitter , labelling it a "waste of time" and "disappointing".

The chain promised app-users a free breakfast muffin this morning until 11am.

But many hungry customers were turned away from the chain after the app crashed at around 10am leaving them unable to prove they had downloaded the discount on their phone.

Digital monitor Downdetector showed more than 300 people were facing issues with the app between 9am and 10am.

Some customers were confronted with an error message that reads 'the offer is not available at this time of day'.

One person wrote on Downdetector: "Traveled to McDonalds to be denied the deal."

And another said: " Appalling customer service at my local @McDonalds. Application clearly not working for the offer this morning, staff were turning away customers and I paid for a McMuffin which had been previously handled by another customer."

A perplexed customer said he couldn't complete the order when he arrived at the chain: "When you get there [McDonalds] the app can't complete your order.

"Staff unable to help. Been trying for ten minutes still coming up with error. At least 5 people having same issue."

Writing on Twitter, one person said: "Ere  @McDonaldsUK  . Woke up early to get my free mcmuffin and the app is experiencing technical difficulties. How very convenient. Had to pay for my bloody breakfast now."

One annoyed customer went as far as to day the disappointment of not getting a free McMuffin ruined his day.

Ben Fox, marketing director for McDonald’s UK&I, previously said the deal is exclusively available through the app, which should enable customers to 'beat the queue, enjoy table service, customise orders and remember their favourite orders'.

Speaking about the deal, Mr Fox, said: " We’re excited to offer customers 24 deals over 23 days to brighten up the month of January."

Other snacks advertised on the app so far, have included a Bic Mac and Veggie Deluxe. Tomorrow, the chain's first ever vegan range is on offer, with Veggie Dippers being sold at 99p or a Vegetable Deluxe at 99p.