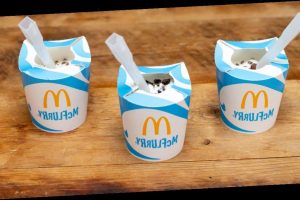 A video "hack" involving the classic McDonald's McFlurry has settled the debate about what to do with the strange-shaped spoons they come with.

For years, customers have tried to use them as straws only to be disappointed that they don't work.

It turns out, the odd shape at the top is not an accident but a crucial part of the design and cleverly slots into part of the McFlurry machine.

In a clip, uploaded on TikTok by McDonald's worker @marxpire from Canada, she demonstrates how an Oreo McFlurry gets made.

Dunking the spoon in the creamy mixture, she puts the top in the McFlurry machine and then presses a button.

The McFlurry is automatically stirred, whipping it up ready to give to the customer.

The video was watched more than four million times.

Dedicated Maccies fans said they were aware of the spoon's purpose – but others admitted they had no idea about it.

"Lmao, I still remember when I got frustrated that nothing came out when I used it as a straw," joked one TikTok user.

A second commented: "I know for a fact that every person who has a McFlurry the first time tries to drink though the spoon."

"Who else has a lazy local McDonald's that never mixes it for you?" moaned another person.

Someone else wrote: "I’m working as a McDonald's manager and I can tell you honestly, some people are lazy to stir with that machine but I will."

"I’m the worker who puts more Oreo on your McFlurry you’re welcome," said another.

END_OF_DOCUMENT_TOKEN_TO_BE_REPLACED

END_OF_DOCUMENT_TOKEN_TO_BE_REPLACED
We and our partners use cookies on this site to improve our service, perform analytics, personalize advertising, measure advertising performance, and remember website preferences.Ok