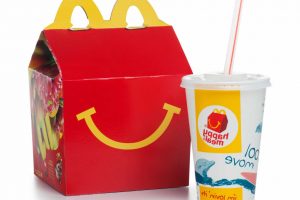 POKEMON toys that come with McDonald's Happy Meals are being resold on eBay for hundreds of pounds.

A new range of Pokemon cards celebrating 25 years of the cartoon can now be found in the kids meal boxes which cost less than £3. 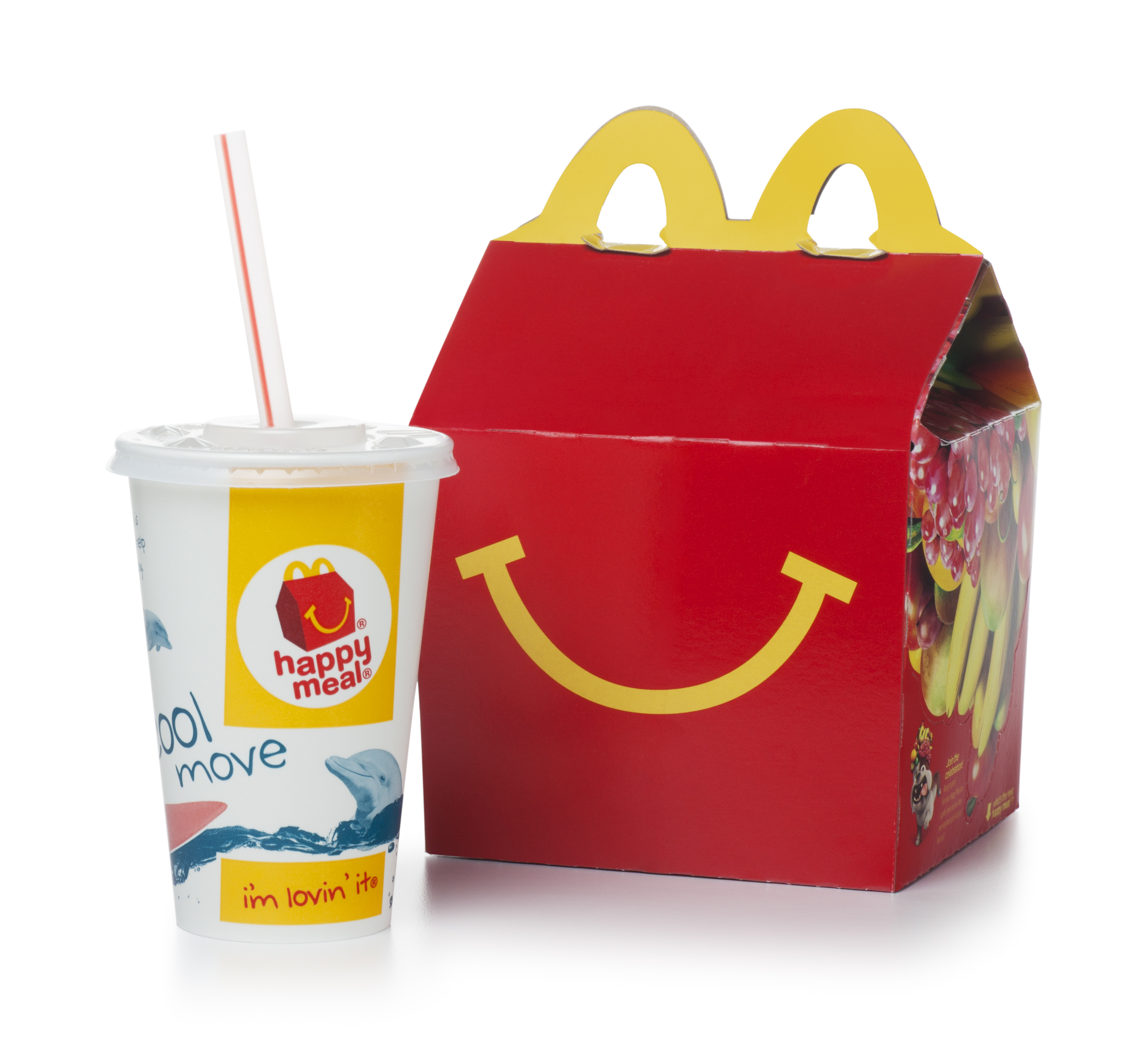 Each McDonald's Happy Meal comes with one pack of four trading cards and either stickers, a trading card box or frame.

The special edition 25th anniversary trading cards are only available from McDonald's and can't be bought in shops.

The fast food chain has been forced to limit how many people can get, introducing a "fair order policy" that allows customers to buy only one more toy with each transaction.

The restriction comes after huge demand for the cards in the US and scalpers were spotted selling the cards for hundreds of dollars on eBay. 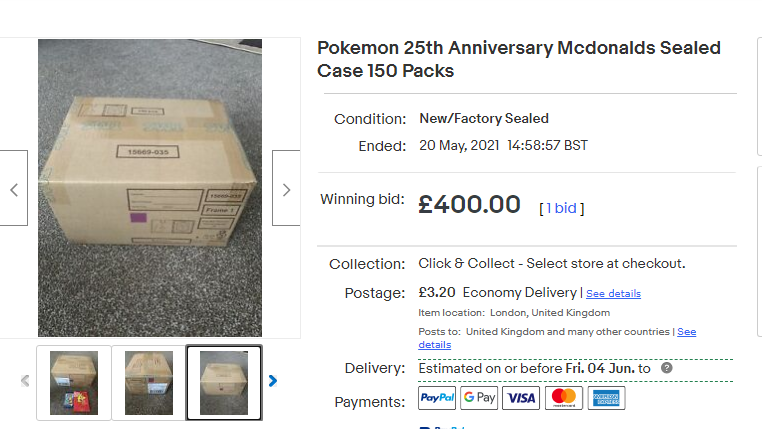 Some McDonald's restaurants stateside were forced to impose restrictions on how many people could buy after shortages were reported.

Despite the limit, boxes worth of the cards have now been spotted on eBay in the UK with a price tag of hundreds of pounds.

It's not clear where these boxes have come from though, as you only get one pack of cards per meal.

Even so, a giant box of cards containing 150 packs and described as "new/factory sealed" was sold this week for £400, according to eBay's sold listings.

A live listing claims to offer a similarly large sealed box of the cards witha "buy now" price of £649.99 and 10 people are watching the listing.

A Happy Meal comes with a main snack of either a hamburger, cheeseburger, chicken McNuggets, veggie dippers or fish fingers.

Happy Meals usually cost around £2.79 but prices can vary depending on where you are.

There are 50 cards to collect in total, including some that are holographic. 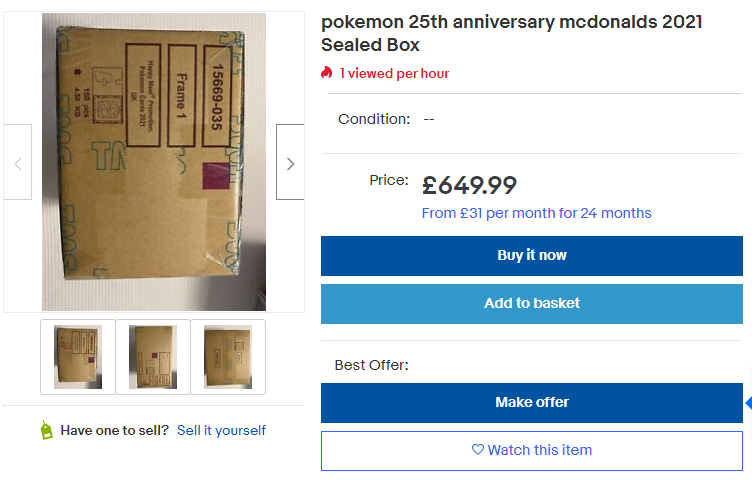 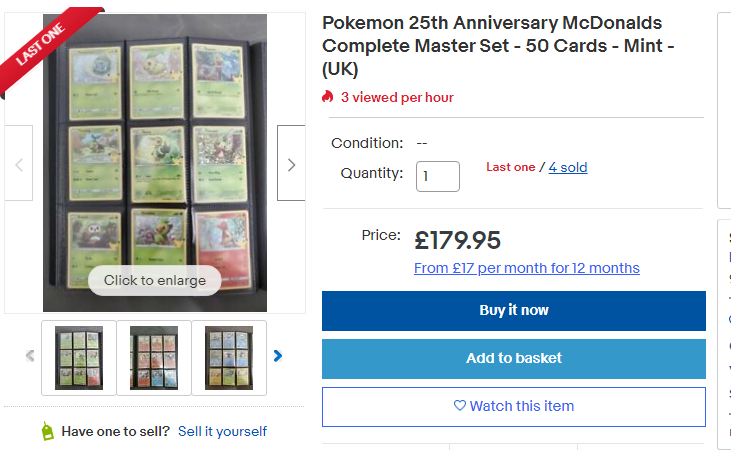 A complete set was sold on eBay for £161 after attracting 11 bids.

Another was listed as sold after being listed for a best offer price of £189, though there's now way to be sure this is the price the buyer paid.

Meanwhile, a live listing for another complete set has a price tag of £179.95 and 55 people watching.

Pokemon fans on trading forums have also spotted the large boxes of unopened cards being flogged on eBay for hundreds of pounds.

Collectors have also reported they were able to get hold of more than one extra set of cards from restaurants, despite the limit.

A McDonald's spokesperson said: “We have introduced a fair purchase policy to avoid any disappointment for our customers and will continue to do so.

"This enables customers to buy one additional Pokemon card set with each Happy Meal order.

“We are investigating the cases of cards appearing on eBay as a matter of urgency.”

Single and small numbers of packs of the cards are being sold for far less.

The 25th anniversary special edition McDonald's were added to Happy Meals from May 19 and come in a Pikachu design box.

Pokemon became popular in the 1990s and cards from that time can sell for thousands of pounds.

McDonald's is doing 25% off food and there's no minimum spend – here's how to get it.

There's now a BTS McDonald's meal and people are lovin' it.

McDonald's Monopoly is returning this summer and there are loads of prizes up for grabs.