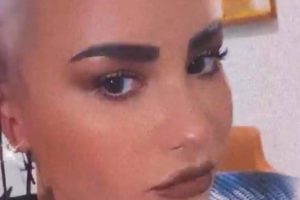 Demi Lovato has debuted their new tattoo on the side of their head and has shared the interesting meaning behind the intricate inking.

The Sorry Not Sorry singer, 29, who recently announced they identify as non-binary and have changed their pronouns to they/them, shared a snap on the side of their skull and shared a quote which seemed to be the inspiration behind the new tattoo.

Meanwhile Demi, who was born in Albuquerque, New Mexico, shared a quote about Grandmother Spider, a legend from Native American mythology, alongside the tattoo.

In Hopi mythology, Spider Grandmother, who represents a leader and a wise individual, can take the shape of an old, timeless woman as well as a common spider in many Hopi stories.

When she is in spider form, Spider Grandmother is believed to live underground in a hole that is similar to a kiva which is large room below ground that is used for spiritual ceremonies and meetings.

However when Spider Grandmother is called to help, she can lead people in many ways including giving advice or providing medicinal cures.

Demi came out as non-binary last year and announced their pronouns are they/them, explaining how it represents the 'fluidity' in their gender and allows them to feel their 'most authentic self'.

The star has also been open about their recovery from addiction and their sobriety, after a near-fatal overdose left them with brain damage.

Demi had three strokes and a heart attack in 2018 after the overdose, which left Demi 'five to 10 minutes' away from death.

Speaking to Ellen DeGeneres, Demi said: "I talk about a lot. The world has been so loving and accepting of me telling my story and just, there's been so much love and support.

"What's great is we live in a time when nobody's perfect, and we're not gonna get role models by watching people not make mistakes.

"We are going to meet and learn from our role models who have overcome their deepest darkest struggles. I wanted to show everyone — first I wanted to set the record straight.

"I just wanted to tell the world, 'Hey, this is what happened, this is how I got through it, and hopefully this can help you too'.

"Because this journey has been such a wild ride but I've learned so much and I can't wait to share it with the world."