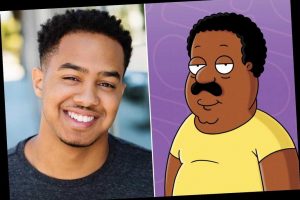 Arif Zahir is getting ready for his closeup on “Family Guy.”

The YouTube star, 26, was hired in late September to replace Mike Henry as the voice of Cleveland Brown on the long-running animated series, in its 18th season on Fox (Sundays at 9:30 p.m.) He makes his debut as Cleveland next season.

“This is my first big role,” Zahir says. “It’ overwhelming and I’m really excited.”

Henry, who is white, has voiced Cleveland, an African-American, since Seth MacFarlane’s series premiered in 1999. In June, he announced his departure from the role amidst a cultural reckoning following the killing of George Floyd and subsequent worldwide Black Lives Matter protests.

“I love this character, but persons of color should play characters of color,” Henry said at the time. He was one of several white voice actors who stepped back from voicing black animated characters, including Jenny Slate ( “Big Mouth”) and Hank Azaria (“The Simpsons”).

Henry will continue to voice other “Family Guy” characters, including Bruce the Performance Artist. Meanwhile, as Fox searched for his replacement, they soon noticed Zahir, who does voices and impressions — including Cleveland — on his YouTube channel, which has over 6 million subscribers to date.

“I did an impression of Cleveland and [producers] mentioned that they had seen that, and they said ‘We’d love for you to have your shot at the role,’ ” says Zahir. “It was a surreal moment. It was like a month or a month-and-a- half long process. It was over Zoom when they offered me the part. I wanted to scream as loud as I could. It felt unreal.”

A lifelong performer, Zahir has been creating the YouTube videos that ultimately won him the coveted “Family Guy” job since he was a teenager.

“I was always an actor at heart as a kid,” he says. “I made my first YouTube channel in 2006 [doing] magic tricks. Then in 2012, I was like, ‘Let me start doing some gaming stuff,’ and I’d be doing voices [while playing] games. And people were like, ‘You should make that into a channel.’ So I tried that out in like 2013, and it’s my prime bread and butter — and where my life has been.

“I feel honored to be part of the conversation,” he says. “I do feel like representation is very important within Hollywood and I’m overwhelmed to…help shape an important topic like that, and open doors for future opportunities for people of color.”

He says, though, that the casting of characters should also be flexible.

“I also think that doesn’t necessarily mean that if you’re a certain race or color, that you have to play that character [with the same background],” he says. “I think each circumstance is different and you have to approach each opportunity differently. The more we’re able to provide opportunities to people of color — where they clearly have a perspective that should be considered when creating and playing a character — we should.”

While Zahir is tight-lipped on where his version of Cleveland will go, he’s already started recording Season 19.

“I’m doing my best to make fans happy and prove to them that I can keep the character the same that he’s been, and Mike [Henry] will help me through that,” he says. “Luckily, I felt like studying the character for almost seven years [for YouTube] gave me the chance to sit down, nitpick, and really get it right.”

END_OF_DOCUMENT_TOKEN_TO_BE_REPLACED

END_OF_DOCUMENT_TOKEN_TO_BE_REPLACED
We and our partners use cookies on this site to improve our service, perform analytics, personalize advertising, measure advertising performance, and remember website preferences.Ok