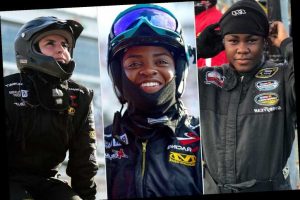 While the Daytona 500 Race is a historic event within the world of NASCAR, these three women are making history on their own terms.

Brehanna Daniels, Breanna O'Leary and Dalanda Ouendeno are all graduates of the NASCAR Drive for Diversity program, an initiative by the organization to create diverse and inclusive pit crew teams. With the help of this program, Daniels, 27, became the first Black woman to be a NASCAR tire changer.

"Making history, it means a lot, and I feel like God couldn't have picked anybody else better to do the job," Daniels tells PEOPLE. "It takes a strong person to be in the position that I'm in to make change. And definitely all the other women that looked like me." Daniels, similar to both O'Leary and Ouendeno, was a collegiate athlete, serving as a point guard on Norfolk State University Women's Basketball team. She was flagged down by a staff member at her school's athletic department to try out for the Drive for Diversity program.

"She was like, 'Hey you know, the NASCAR pit crew has come to the school to host a trial on Wednesday'," says Daniels. "I looked at her like, 'Girl, I don't even watch NASCAR.'"

Ouendeno, 23, was also far removed from the American racing world — she was born in France and didn't speak English until arriving in the U.S. She was a defender on the University of Miami's soccer team and then played for a top division French soccer team, Paris St. German, from 2009 to 2015. She later became a graduate of the 2019-20 NASCAR Drive for Diversity program and pitted her first NASCAR national series race at Charlotte Motor Speedway in 2020. O'Leary, a previous softball player at Alcorn State University, also never imagined herself as a pit crew member for NASCAR, but she has been a tire changer for the organization for five years now. She says the best part of the experience has been making a difference for young women and girls.

"When I came into this, it was just me pursuing this opportunity," O'Leary tells PEOPLE. "I didn't even know that I could be making such an impact until people would bring it to light, and they would come up to me and be like, 'I can tell my granddaughter, you can do this too.'" NASCAR has made attempts to create a more inclusive community by creating the program and banning the Confederate flag from any of their events. Meanwhile, O'Leary and Daniels — who are friends, former roommates and some of the only female pit crew members in the organization — say they're brushing off any hate that comes their way.

"I really don't listen to what the naysayers have to say," says Daniels. "It just gives me [the] motivation to do more of what I'm already doing. Everybody's not happy that I'm in the position that I'm in … but I'm optimistic about things. I don't really change for anyone."

With the anticipation of the 2021 Daytona 500 this Sunday, the three are focused after preparing all season for each racing event that comes their way. Daniels and Ouendeno will pit for the No. 51 Rick Ware Racing team, while O'Leary will pit for Chip Ganassi Racing.

O'Leary hopes that racing will continue to make strides to become a sport that's welcoming to all.

"I think that just bringing diversity to the sport, that's how everybody gets better," says O'Leary. "That's how things are able to grow, because somebody might come from somewhere and teach me something I didn't know. So I think it should be welcome to everybody and everybody who wants to do it should work hard and can do it."