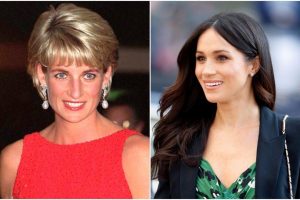 Meghan, Duchess of Sussex never got to meet her late mother-in-law, Princess Diana. However, it’s clear to many onlookers that the two women are quite similar.

Their respective childhoods had a lot of parallels as well. In fact, both Meghan and Diana picked up some very similar skills from having to navigate the world they were born into.

Meghan and Diana both had parents who divorced when they were young.

Meghan’s parents, Thomas Markle Sr. and Doria Ragland, divorced when she was in elementary school. Growing up, Meghan spent a lot of time with both sides of her family. Although her parents were cordial to one another, according to Lady Colin Campbell in her book Meghan and Harry: The Real Story, Meghan spent a lot of time dealing with their differences and relaying communications between them.

Meanwhile, Diana’s parents, John Spencer and Frances Roche, divorced when Diana was around 8 years old. Spencer and Roche both fought bitterly for custody of their children, and Diana’s father ended up winning. However, Diana’s childhood at her father’s home was anything but stable. The family changed nannies frequently, and Diana extremely disliked her stepmother.

Meghan and Diana learned how to get what they want from other people, royal author says

Meghan and Diana had to learn about resiliency from a young age. According to Lady Colin Campbell, they both ended up developing great people skills, which helped them get what they wanted.

“Both learned from an early age how to navigate between opposing factions, how to play Peter off against Paul so that they would get what they wanted,” Lady Colin wrote in Meghan and Harry. “Both were soft and sweet but both were also tough beneath the ostensibly vulnerable exterior.”

The author added, “Both had developed the tactical abilities unique to the children of broken homes. They had learned at an early age how to palliate, negotiate, and use whatever tools worked well for them, to achieve their goal: whatever their goal might be.”

This skill can be seen in how they handle the media. Diana often used the press to her advantage and gave interviews to journalists to get her side of the story out to the public. Meghan has also been known to collaborate with journalists and leak stories about herself.

Meghan’s and Diana’s childhoods also differed in some ways

However, Meghan and Diana’s childhoods had some differences as well.

For example, they both grew up in two different countries and socioeconomic statuses. Meghan was a middle class girl from the United States. Meanwhile, Diana was a child of an aristocratic family in the United Kingdom.

By many accounts, Meghan was a popular student among her peers and teachers. She worked hard at school, got good grades, and joined a lot of clubs. On the hand, school was not Diana’s strong suit—she reportedly failed many of her classes.

In any case, it’s still hard to deny Meghan’s life does bear some resemblances to Diana’s.