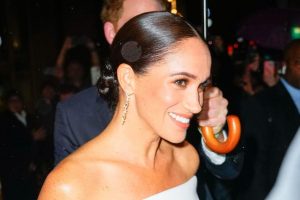 All eyes were on Meghan Markle as she made her red carpet comeback in New York on Tuesday night.

The Duke and Duchess of Sussex were there to receive the Ripple of Hope Award, presented by the Robert F Kennedy Human Rights non-profit organisation.

For the event, Meghan, 41, wore a custom look by Nicolas Ghesquière for Louis Vuitton which featured a striking bardot neckline, long sleeves and front slit which came up to her knees.

The ankle-grazing gown was reminiscent of her iconic Givenchy wedding dress, which also featured an off the shoulder neckline, long sleeves and structure through the waistline.

She accessorised with an aquamarine ring from Princess Diana’s personal collection – the same ring she wore on her wedding day at her evening reception.

The colour white represents peace, which was a bold sartorial choice for Meghan amid the backlash the couple are facing ahead of the release of their tell-all Netflix docu-series, which will begin streaming on Thursday, 8 December.

She paired the striking gown with patent black court heels – her go-to footwear choice when she's on duty.

The Duchess was commended by Kerry Kennedy, who is the daughter of Robert F Kennedy, who said the Sussexes had been “incredibly brave” in addressing the issues of racial justice and mental illness.

“In this world in the wake of Covid there has been a massive spike… people around the globe have said they have anxiety and massive depression.

“For Meghan to get out there on national television and normalise discussion of mental health, at this point, is incredibly important and very brave.”