Mary Poppins Returns is a love letter to the original 1964 film, but it also contains many references to the Mary Poppins novels of the 1930s. While there was only ever one film from Disney (until now), P.L. Travers wrote no less than eight Poppins books, filled with adventures that never made it on screen. The new sequel pulls as much from the first film as it does the books, including a trip inside a Royal Doulton Bowl and a visit with a character book fans will recognize the name of immediately. Meryl Streep’s Mary Poppins Returns character is an excellent reference to the book character Topsy Turvy.

When a fight over their late mother’s Royal Doulton Bowl accidentally leaves a crack in the family heirloom, Mary Poppins takes the Banks children into London to have it repaired by "her cousin." With Jack along for the trip (his bicycle somehow seats five), the group winds up on a street that looks like an offshoot of Diagon Alley. (One assumes Poppins knows people who work and live there.)

At the end of the street, they find a tiny little door and a long name starting with "Topsy." This is how Mary addresses her too, "Cousin Topsy," a woman who can fix anything.

For book readers, this is a reference to the character in Mary Poppins Comes Back, the original 1935 sequel to Mary Poppins. In it, Topsy is actually Topsy Tartlet, a maid in a nearby house and a friend of Poppins. Through Mary, she meets the lovely Mr. Arthur Turvy, a man whose world turns upside down every second Wednesday. Throughout the book, their courtship is an ongoing background plot. By the end of the novel, she’s become Mrs. Topsy Turvy and declares her entire life has turned upside down along with his, and she’s all the happier for it.

The movie version deletes the romance and Arthur, leaving Topsy to be the one whose world turned itself on its head every second Wednesday. Quite literally. Upon opening the door, Mary and company witness the house turn itself around and around until Streep’s character finds herself seated on the ceiling, and everyone must enter by carefully walking up to meet her. 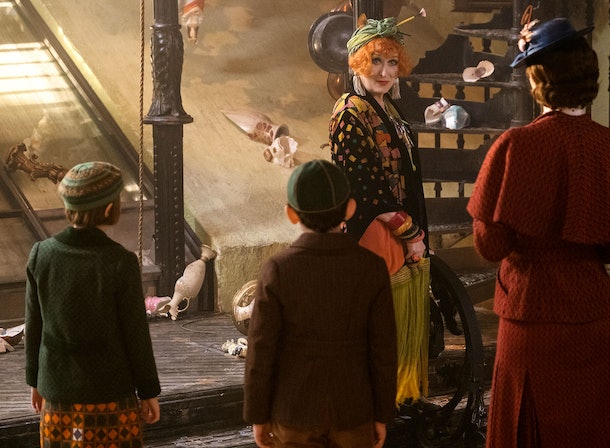 Streep’s song and (upside down) dance number is called "Turning Turtle," comparing herself to a turtle who has been flipped onto its back and is unable to function until someone comes along and rescues it. This being the world of Mary Poppins, the nanny is having none of it. Her advice to her cousin is if life insists on turning everything upside down, she should stand on her head and be upside down with it. The change of perspective should solve everything.

Unsurprisingly, Mary is correct in her assessment as the entire group stands around on their heads discussing how much better the world looks from this angle. With Topsy’s life righted for the moment (even if her place is still the wrong way up) she agrees to fix the family heirloom, to the great relief of the Banks children. Also apparently her house approves too because as the group leaves it turns itself back over, allowing her to work until the next second Wednesday rolls around.