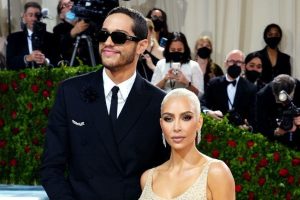 The 2022 Met Gala might just be one of the best yet as a whole host of famous faces took to the Metropolitan Museum of Art in New York in their biggest and best outfits for this year’s event.

On Monday 2 May we saw the likes of Alicia Keys shutting down the carpet with her sparkling look, the Kardashian sisters reigning supreme and Blake Lively wowing in an incredible two-look ensemble. Everyone made sure to embrace the theme of “In America: An Anthology Of Fashion” with the dress code being Gilded Glamour and it’s pretty safe to say they didn’t disappoint.

From countless dazzling ensembles to some weird and wonderful looks, Hollywood royalty and A-listers ascend to the themed carpet with some of the most iconic outfits to grace the Met Gala.

So without further ado, here are some of our best dressed stars from this years incredible event.

We have to start with two of the co-chairs of the event which is power couple Blake Lively and Ryan Reynolds.

Whilst Ryan looked as dapper as always in a black velvet tuxedo, his wife Blake absolutely stole the show in a jaw-dropping embellished gown.

The Atelier Versace dress took over the staircase as the art deco sequinned dress came with a gigantic rust coloured bow which was cleverly undone to reveal a second show-stopping turquoise skirt — phenomenal.

This is definitely another ensemble to add to the 34 year old’s long list of winning looks.

From one power couple to another, newlyweds Brooklyn Beckham and Nicola Peltz lit up the staircase of the Met in gorgeous outfits.

Brooklyn served up smart vibes in an head-to-toe beige outfit whilst his wife Nicola chose to stay with the designers of her incredible wedding dress Valentino.

The 27 year old capture everyone attention as she stood out from the crowd in a bright fuchsia pink off the shoulder caped gown.

It seems that couple took over the red carpet to the event and Kim Kardashian and Pete Davidson posed up a storm together in front of the cameras.

Pete chose to wear a black suit and tie alongside the 41 year old who channelled one of the most iconic Hollywood actresses of the gilded age, Marilyn Monroe.

The reality star wore a simple yet dazzling nude illusion diamanté dress by Jean Louis which was previously worn by Marilyn herself.

Sister Kourtney and her beau Travis changed up the game on the red carpet as the eldest Kardashian sister chose to wear a deconstructed look by Thom Browne.

The 43 year old opted for a cropped white menswear shirt which then allowed the black and nude panel skirt to do all the talking as it showed off her killer curves.

Travis made sure to coordinate his outfit as he ticked all of the boxes in a black tuxedo and pleated skirt with details matching Kourtney’s.

Sister Khloé Kardashian made her Met Gala debut and of course she made sure to impress.

The 37 year old wowed in gold as she chose to keep the silhouette simple but have it adorned with endless amounts of gold beaded fringe.

The look was accessorised with black satin opera gloves and a matching black shawl.

The design saw the 24 year old sport a white mesh bodice t-shirt style top with a dramatic ruffled white skirt which took over the red carpet.

Adding the signature sportswear style of the brand, the ensemble was finished off with a white baseball cap.

Sister Kendall swapped things up as she contrasted her sister Kylie in a complete gothic-inspired designer.

The Prada ballgown made sure to take everyone’s breaths away as the 26 year old ascended the stairs of the Museum in what can only be described as a dream gown for a princess.

Whilst the mesh top was embellished with dainty gems, all of the detail went into the bellowing pleated skirt — that’s how to make an entrance.

We don’t think anyone sparkled as much as Alicia Keys did in a show-stopping Ralph Lauren dress.

Not only did the silver diamanté dress capture every single flash of light from the cameras but it came with its very own black cape which was embellished with thousands of silver diamantés which recreated the New York skyline — where can we get one?

Bridgerton’s Phoebe Dynevor made sure to make a transformation for her first ever Met Gala and it didn’t disappoint as she was crowned the diamond of the Gala.

Not only did she sport a dark brown wavy wig but she also swapped her colourful regal wardrobe for a floor length black lace Louis Vuitton gown.

The star embraced her gothic side and we’re so here for it.

A professional at dressing for the Met Gala is of course fashion icon Sarah Jessica Parker.

The Sex and the City actress embraced the glamorous theme as she stole our breaths away in a fantastic monochrome ball gown by Christopher John Rogers which of course came with an extravagant headpiece by Philip Treacy as all of her past looks have.

Oscar winning actress Jessica Chastain took on the Gilded Glamour theme and gave everyone a lesson in how to do it with a beyond beautiful outfit.

The 45 year old dazzled as she sparkled in a head-to-toe scarlet red sequin dress by designer brand Gucci.

Just like she won Best Actress, she also took home the award for one of the best dressed ladies of the night.

Lizzo ticked all of the boxes at her first Met Gala as she looked as fierce as ever in a creation by Thom Browne.

The singer wore a simple black dress which came with a cut-out section halfway down the skirt, but everyone’s eyes was on the phenomenal gold floral embroidered jacket that she wore over the top.

Whilst some carried coordinating clutch bags, Lizzo won the evening as she took a matching gold flute as her trust accessory.

Model Hailey Bieber looked as radiant as always as she kept it effortlessly cool in a cream Saint Laurent gown.

The silk dress wasn’t just any dress as it came finished with thousands of matching feathers which helped to give a nod to the dress code of the evening.

The 25 year old kept her glam stripped back and simple as she opted for a nude lip, naturally smokey-eye and swept her light brown hair up into a sleek bun.

One Hollywood actor that never fails to disappoint with her red carpet glam is none other than Gemma Chan.

The star floored us all in a dramatic structured Louis Vuitton dress which had us applauding her all night long.

We’re obsessed with the square sleeves that echo the large square skirt, however, we’re still left wondering how she sat down in the oversized outfit.

Actress and singer Janelle Monáe impressed as always when she took to the Met Gala in a more classic ensemble than what we’re used to seeing her sport.

The 36 year old went for a black figure hugging dress by Ralph Lauren which came with a silver striped gem adorned hood that brilliantly framed her flawless face that was made up with a natural look and a bold red lip to add a splash of colour to the ensemble.

No stranger to pulling off fabulous looks on the catwalk, Kaia Gerber strutted her way up the staircase in a heavily embellished silver gown by Alexander McQueen.

The 20 year old oozed glamour which fitted perfectly with the dress code as she posed up a storm before entering the event.

We’re obsessed with the models full head of curls which gave us supermodel vibes just like her mum Cindy Crawford.

Actress Tessa Thompson showed how tulle can be cool as she donned a layered pink tulle dress by designer Carolina Herrera.

Along with the corset style bodice and tulle shoulder wrap, we love how she echoed the pink with a bright blush on her cheeks.