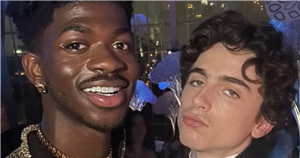 The Met Gala is one of the most highly-anticipated events in the social calendar for anyone who is a notable figure in the entertainment and fashion industries.

Held at the Metropolitan Museum of Art in New York on September 14, the 2021 celebration was back with a bang and brought with it a whole host of dazzling guests.

From Kim Kardashian's Slenderman-style morph suit to Lil Nas X's three costume changes, the night really shone a spotlight on those with an undeniable eye for fashion.

Whilst the majority of the event's more seasoned guests such as Anna Wintour and Kim K kept a relatively low profile on social media, plenty of other attendees gave us all a glimpse into the A-List event.

The Met Gala is notoriously difficult to grab an invite to, with the event's committee all having to approve those who are fortunate to attend.

The celebs were all hot on their Instagram posts, with Lil Nas X in particular grabbing selfies with plenty of huge names, which kept fans entertained for hours are they wondered what actually went on at the top-secret bash.

The 22-year-old Old Town Road and Industry Baby singer shared selfies with the likes of Call Me By Your Name actor Timothee Chalamet, 25, who pouted for the snap whilst at the gala.

The singer, whose real name is Montero Lamar Hill, also posed with fellow hitmaker Billie Eilish, 19, who had stunned on the red carpet in a blonde wig and huge off-the-shoulder dress earlier in the evening.

The Bad Guy singer, who is known for her grungy aesthetic was giving off Marilyn Monroe vibes, but joked around with her singer pal as she stuck her tongue out for a snap after the main event.

TikTok star Addison Rae also made sure to grab a snap with him, as did Pete Davidson and Jack Harlow.

Before the bash, Lil Nas X's 10.3million followers were shown the view from his Manhattan hotel suite, as he walked around in his golden Versace dressing gown.

He wasn't the only Instagram fan on the night, as both Kendall Jenner and Karlie Kloss also shared plenty of snaps .

Kendall posted a picture of the crowds gathered outside the Met Museum, as hundreds of adoring fans came together for a chance to see their favourite celebs.

The 26 year old model and reality TV star headed to the red carpet in a stunning Matthew Williamson dress which was nude-coloured and adorned in thousands of silver diamonds.

A video shared on her story shows the star walking up the steps at the event and seeing her mum, Kris Jenner as she walks next to her dress' designer.

Kris – ever the momager – was filming her daughter on her phone as she walked towards her, before giving her a hug.

The stunning star, 29, showed what she'd been snacking on during the event; a very healthy green juice from Pressed, a chocolate peanut-flavoured Perfect Bar, and lastly some french fries from celebrity-endorsed brand Sir Kensington's.

Strangely, the condiments brand doesn't usually sell fries, but is known for their wide selection of dips, including a collaboration with Chrissie Teigen, who created their Honey Mustard Fry Sauce.

Of course, it wouldn't be a celeb event if Kim Kardashian hadn't posted about it, and the star did let us in on a few behind-the-scenes moments.

Hilariously, the star had spent hours getting her face painted by makeup artist friend, Mario, only to later cover up her whole face in her outfit.

For more juicy gossip on your favourite stars, sign up to our daily newsletter here