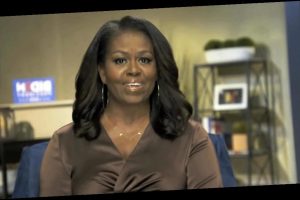 Michelle Obama is just like other empty nesters. The former first lady said she is moving towards retirement so she and her husband, former President Barack Obama, can move somewhere sunny. Mrs. Obama opened up about her plans, as well as her pandemic experience, in an interview with People magazine out on Wednesday.

Since leaving the White House, Mrs. Obama has started several new projects, including the creation of a production company with her husband, Higher Ground, which struck a deal with Netflix. However, the 57-year-old, who was just selected for the National Women’s Hall of Fame, is looking toward a simpler life on the horizon.

“We’re building the foundation for somebody else to continue the work so we can retire and be with each other — and Barack can golf too much, and I can tease him about golfing too much because he’s got nothing else to do,” she continued.

Until then, the Obamas have a slate of upcoming projects — including the premiere of her children’s cooking show, “Waffles + Mochi,” on Netflix. She plays Mrs. O., the neighborhood grocer, telling People: “I’m basically being myself.”

But like many Americans, life did slow down for the Obamas last year when the coronavirus pandemic struck.

They split their time between the family’s homes in Washington, D.C. and Martha’s Vineyard in Massachusetts, according to People. Their daughters, Malia and Sasha, completed their college semesters at Harvard and University of Michigan virtually at home.

“Our girls were supposed to have emptied out of my nest,” Mrs. Obama said. “I was sort of celebrating that they were out building their lives and allowing me the emotional space to let them go. Well, they’re back!”

She said she didn’t want her daughters to miss out on the independence of young adulthood, so they weren’t following the same set of rules they used to. “They came back as young women and our conversations are more peer-oriented than they are mother-to-daughter,” she said, adding that she enjoyed getting a glimpse of their virtual classes.

She helped fill the time practicing her knitting and lap swimming. She also opened up to People about her mental health during the difficult year.

Mrs. Obama has in the past spoken about the “low-grade depression” she began experiencing, saying on her podcast last August that the year 2020 felt “heavy” for many.

“That was during a time when a lot of hard stuff was going on,” she told People. “We had the continued killing of Black men at the hands of police. Just seeing the video of George Floyd, experiencing that eight minutes. That’s a lot to take on, not to mention being in the middle of a quarantine.”

“Depression is understandable during these times,” she continued. “I needed to acknowledge what I was going through, because a lot of times we feel like we have to cover that part of ourselves up, that we always have to rise above and look as if we’re not paddling hard underneath the water.”

Mrs. Obama, who has been vaccinated, said now “there is light at the end of the tunnel.”

“We breathe for a moment, but there’s still work to be done,” she said. “That’s why Barack and I are focused on developing the next generation of leaders through the Obama Foundation … so that each year we step further out of the spotlight and make room for them.”

In addition to working on the Obama Foundation and the Obama Presidential Center on Chicago’s South Side, she also recently released a new, special young-reader edition of her best-selling memoir, “Becoming.” So, while retirement is on the horizon, the former first lady has a lot to keep her busy right now.