SAYULA, Mexico — Thousands of Central American migrants traveling in a caravan through southern Mexico had their brief hopes of reaching the country’s capital on Saturday dashed after the governor of Veracruz state pulled an offer of dozens of buses to take them there.

Gov. Miguel Angel Yunes announced Friday evening that authorities in Veracruz would be providing not only humanitarian assistance to the migrants but buses to leapfrog them to Mexico City after three grueling weeks spent walking along highways and hitching rides to reach the coastal state.

“It is very important that they be able to move soon from Veracruz toward another place,” Yunes said in a video message. “For that reason, we also offered them transportation so that, if possible, tomorrow … they may be able to go to Mexico City or to the place they wish.”

Organizers of the caravan of about 4,000 migrants told its members that they would be leaving the town of Sayula around 5 a.m. Saturday in convoys of 10 buses for the 10- to 12-hour trip. A jubilant caravan coordinator told the group: “We are all going!” But almost immediately afterward, Yunes released a second video saying that because Mexico City’s water system was undergoing maintenance and 7 million of its people would be without water over the weekend, it would not be correct to send the migrants there. The maintenance has been known about for weeks.

Instead he offered to have the migrants taken to another city in Veracruz until the problem in Mexico City is resolved.

“I want to make an offer to the migrants that while this problem is being resolved they accept my invitation to go to a city in Veracruz” that has the conditions to host them, he said.

Migrants expressed surprise and disappointment at the decision, and it was not immediately known what they would do Saturday.

“We believe it was a manipulation and a game played with the sentiments of the migrants,” said 21-year-old migrant Osman Quiroz. “It is disagreeable news since the people were happy.” 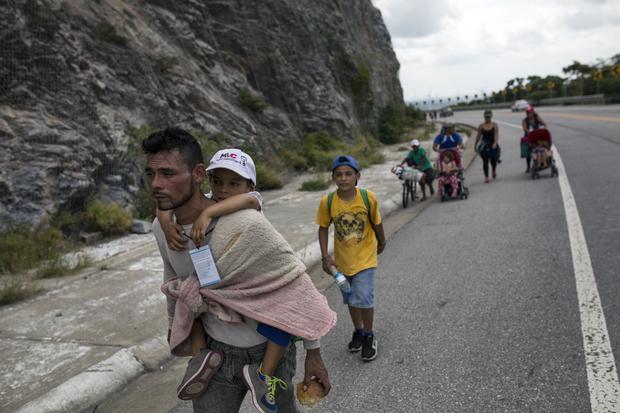 Caravan organizers released a statement rejecting Yunes’ decision and demanding that he fulfill his offer of buses to Mexico City.

The offer of buses to Mexico City and the subsequent reversal came after the migrants’ request for buses to the capital were ignored by the Mexican government days earlier when they were in Juchitan, Oaxaca state.

Earlier in the day, a third caravan of migrants — this time from El Salvador — waded over the Suchiate River into Mexico on Friday, bringing another 1,000 to 1,500 people who want to reach the U.S. border.

The third caravan tried to cross the bridge between Guatemala and Mexico, but Mexican authorities told those traveling in it they would have to show passports and visas and enter in groups of 50 for processing. The Salvadorans expressed misgivings that they would be deported, so they turned around and waded across a shallow stretch of the river to enter Mexico. 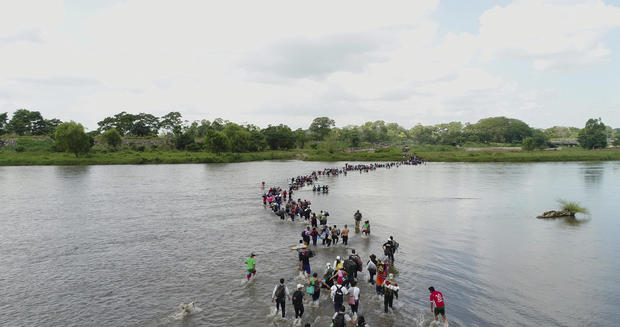 Salvadoran migrants cross the Suchiate river, the border between Guatemala and Mexico, on Friday, Nov. 2, 2018.

Although police were present, they did not try to physically stop the migrants, who later walked along a highway toward the nearest large city, Tapachula.

Mexico is now faced with the unprecedented situation of having three caravans stretched out over 300 miles of highways in the southern states of Chiapas and Oaxaca, with a total of about 6,000 migrants. The first, largest group of mainly Honduran migrants entered Mexico on Oct. 19.

Though the first caravan once numbered as many as 7,000, it has shrunk significantly. It has been hard to know their exact numbers as people scatter across highways and in small towns.

The second caravan, also of about 1,000 to 1,500 people, entered Mexico earlier this week and is now in Mapastepec, Chiapas. The second group includes Hondurans, Salvadorans and some Guatemalans. In addition, the government identified a fourth, smaller group of 300 Central American migrants walking further ahead, in the Gulf coast state of Veracruz.

It remained unclear how many migrants would make it; 20 days of scorching heat, constant walking, chills, rain and illness had taken their toll. Mexico’s Interior Department says nearly 3,000 of the migrants in the first caravan have applied for refuge in Mexico; hundreds more have returned home.

The migrants made a grueling 40-mile trek from Juchitan, Oaxaca, on Thursday, after they failed to get the bus transportation they had hoped for. Hitching rides on Friday allowed them to arrive early at their destination for the day, Donaji, and some headed to a town even farther north, Sayula. 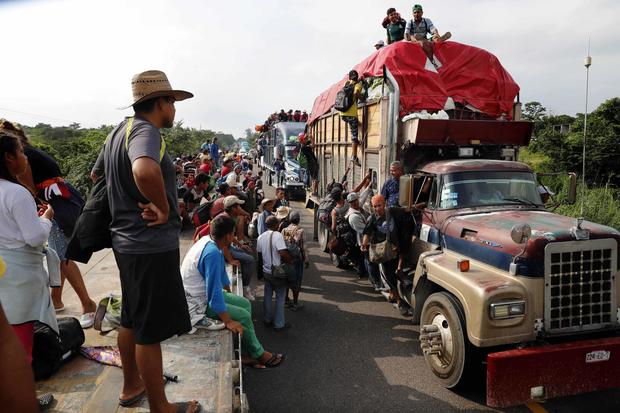 Central American migrants, part of the caravan hoping to reach the U.S. border, get a ride on trucks, in Donaji, Oaxaca state, Mexico, Friday, Nov. 2, 2018.

Immigration agents and police have been nibbling at the edges of the first two caravans.

A federal official who was not authorized to be quoted by name said 153 migrants in the second caravan were detained Wednesday during highway inspections in Chiapas, a short distance from the Guatemalan border. There has also been pressure on the first caravan. Federal police began pulling freight trucks over and forcing migrants off, saying their habit of clinging to the tops or sides of the trucks was dangerous.

At other points along the route, police have forced overloaded pickups to drop off migrants. On previous days, they have ordered passenger vans to stop helping with transportation.

President Donald Trump has ordered U.S. troops to the Mexican border in response to the caravans of migrants. More than 7,000 active duty troops have been told to deploy to Texas, Arizona and California.